I was honoured to be asked to be on the blog tour for Leonie Roberts' debut picture book, 'My Colourful Chameleon.' Having a pet chameleon isn't always as fun as it seems - Mum is getting fed up of never being able to spot where she is.  In the garden, on the stairs, on Mum's … END_OF_DOCUMENT_TOKEN_TO_BE_REPLACED

Up high, in the dark, dark sky....a message: LOST, ONE SMALL STAR. When a little brother happens upon a very sparkly treasure whilst out hunting, he and his big sister try very hard to find its owner - surely something so special must have an owner. But search as they may, no one seems to … END_OF_DOCUMENT_TOKEN_TO_BE_REPLACED

If you’re looking for a narrator who will transport straight into their world, look no further than Twister. Lushly written and pulsing with magic. You’re in for a treat. Following the mysterious disappearance of her father, Twister lives on a farm with her ill mother and Aunt Honey with her faithful dog, Point.  Determined to help … END_OF_DOCUMENT_TOKEN_TO_BE_REPLACED

Congratulations are due to the excellent David Solomons as ‘My Gym Teacher is an Alien Overlord,’ won the PopJam Readers’ Choice Award at the Lollies 2017 award ceremony tonight! I am absolutely thrilled for everyone involved and can’t wait for another instalment in the future.

I am so excited and honoured to be one of this year’s Lollies champions, I am even more excited that I get to be David Solomons’ champion as I’ve been a huge fan of his hilarious (and award-wining) superhero series since the release of its very first instalment, ‘My Brother is a Superhero.’  I’m also beyond excited that we have a brilliant blog post from David about superheroes and funny books AND an awesome book bundle giveaway!

The Lollies (The Laugh Out Loud 2017 Book Awards) are the brainchild of legend Michael Rosen and super-publisher Scholastic, and were intended both to fill the void…

Welcome to 'The Bee Book.' Prepare to ‘bee’ amazed by this beautiful hardback book which celebrates the mind-blowing creature which is the bee and make sure you read t the end for a special behind-the-scenes peek into Charlotte’s sketch book. The Bee Book is absolutely packed full of information about the often misunderstood fuzzy little … END_OF_DOCUMENT_TOKEN_TO_BE_REPLACED 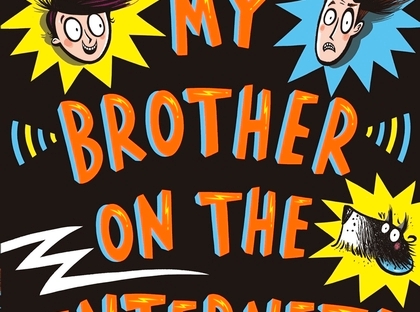 Welcome to my stop on the blog tour for: 'I Swapped My Brother on the Internet.'  I’m sure those of us with siblings have at some point daydreamed about trading our annoying younger brothers or moody big sisters for an upgraded model.  Well, ‘Sweet mangoes of heaven!’ Jonny has discovered a website where he’s able … END_OF_DOCUMENT_TOKEN_TO_BE_REPLACED

International World Book Giving Day is now in its sixth year and continues to spread far and wide across the globe, with people in countries such as Nepal, India, Canada, Romania, South Africa, UK, France, Germany, Australia, New Zealand, Italy, Fiji, Nigerian, Czech Republic, USA, Cambodia and the Philippines.  Phew!  It is run entirely by … END_OF_DOCUMENT_TOKEN_TO_BE_REPLACED