At the end of April, great excitement rippled through our school library when we were invited on a top-secret mission to Scholastic HQ to interview the judges after they’d selected the short list for the Laugh Out Loud 2017 Book Awards (aka The Lollies).  These awards were established by Michael Rosen to fill the void left by the ending of the Roald Dahl Funny Prize for Children’s Books, to help raise the profile of humorous children’s books.  To hear Michael Rosen’s thoughts on funny books, click HERE. Cue even more excitement when we discovered who the full judging panel was:  Award founder and legend, Michael Rosen; Nicolette Jones, esteemed Sunday Times Children’s Book Editor and author; and Katie Thistelton, CBBC present and Book Club creator!

Chalk Ridge’s super-librarian, Zak Collingwood, and I decided that we should reward some of our pupil librarians for all their hard work over the year by taking them with us to Scholastic to quiz the judges on books, lols and their favourite cheese-related jokes.  After winning a trip to the Lollies 2016 awards ceremony, and presenting an award to the 6 – 8-year-old category winners, Knife and Packer for ‘Badly Drawn Beth’ last year, we couldn’t wait to see what happened behind the scenes when the judges had the very difficult task of narrowing down some of this year’s funniest books to a short list.  You can check out our visit report HERE.

Unfortunately, we weren’t allowed to be in the room with the judges when they were making their decisions, but this was more than made up for by the fantastic tour around the offices which we were treated to.

However, before we were shown around, we were all interviewed by the Scholastic team.  The hot topic of conversation was the importance of funny children’s literature, which was an easy thing to talk about – everybody needs to laugh, especially in today’s society where laughs can be hard to come by.  Humorous books can also provide a great in-road to books for children who are perhaps more reluctant readers.  Joke books, comic verse, and funny stories are all brilliant ways to expand a child’s reading horizons.

I don’t think the children were expecting to actually be in front of a camera, holding a microphone, themselves – I’d never seen them so quiet!  They soon warmed up a little and did themselves proud as they answered the questions posed with poise.

We then got a taste of the celebrity lifestyle as we were followed around with our own film crew for the rest of our visit.  The next stop was the marketing department, where the children were fascinated to learn how a story goes from being just an idea, to a published book – layouts, colour palette, and front cover design are all things which are considered very carefully to ensure the book stands out on the shelves amongst its competitors.

After that, we were whisked through the workstations towards a magical bookcase filled with new publications and invited to choose one each to take home.  Our eyes lit up and cooing over the covers commenced.  Most of the children made their selections quickly, but some of us had to go back later as we just couldn’t decide what we wanted to read!  These came in useful on the journey home as our train was delayed.  The children read them whilst sat on the floor of a packed carriage!

Time for lunch – while the children tucked in (and practised their jokes), the judges finished up making their selections. Everyone was very excited when Katie and Nicolette popped in to say hello and sign the children’s notebooks.  I have NEVER known the children so quiet – they were totally awestruck!  This said, they did manage to secure a promise from Katie that she would give them a shout out on CBBC the next day (which she did).  It’s brilliant when kids get to meet people they look up to in real-life.  Judging by the chatter on the way home, they were really inspired.

Finally, it was time to interview the judges….silence again descended upon the room.  That is, until the mighty Michael Rosen put everyone at ease and signed notebooks aplenty (and a book for my own children – teacher perks!)  I was delighted to bamboozle Mr Rosen with one of my son’s best cheese jokes –

Q.  Which cheese is made backwards?

He swore the punchline was on the tip of his tongue, but I’m not sure I believe him.

Mr Collingwood and our pupils had spent a long time thinking up questions to ask the judges about funny books, their reading habits and preferred brand of lipstick (Mac, in case you’re interested.)  I was so impressed by their professionalism, particularly as they were faced with a rather intimidating film crew across the table from them. Footage of their brilliant interviews will be available to view soon – keep an eye out on this blog for updates. 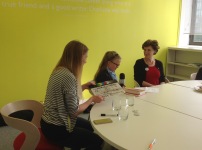 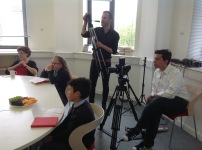 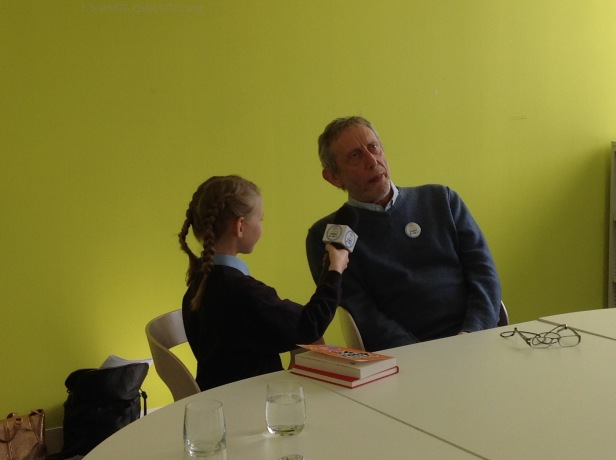 We were so lucky to be invited to visit Scholastic on such an important day and to meet some of our heroes.  It truly was an occassion which none of us will ever forget.  Now we just have to wait until the fifth of June to find out who the 12 nominees are.  I’ll be doing another post giving you a run down of the chosen few and giving some away to lucky readers!

For more updates, you can link the Scholastic’s official Lollies page HERE.