I am delighted introduce to you the winner of the Stratford-Salariya Picture Book Prize. 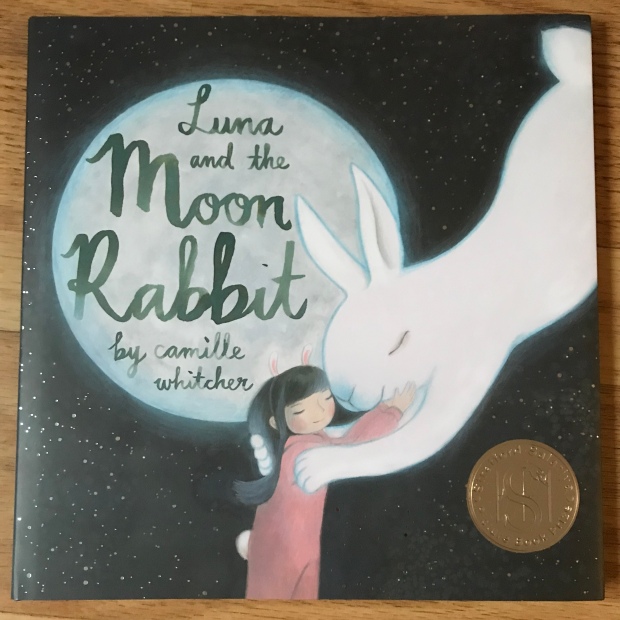 In a tale inspired by the stories from Asian folklore told to Camille during her childhood, ‘Luna and the Moon Rabbit’ tells the magical of a curious little girl seeking a moonlit adventure.

When the mysterious Moon Rabbit arrives one night, Luna finds herself

being led through meadows into woods filled with fireflies and golden dandelion fields. As Luna’s eyelids start to get heavy, the rabbit gently carries Luna back home to bed to dream.

This is such a beautiful, soft and soothing story with gorgeous illustrations which enhance the dreamlike feeling of the text. It would make a perfect bedtime read as it ends how all bedtime stories should – with the child tucked up safely in bed, dreaming.

Let me now introduce Camille herself, talking about her journey to being published, overcoming rejections and winning the prize.

Hi and thank you for having me here today!

My journey began on graduating from the MA in Children’s Book Illustration course in early 2016.  The first time I officially presented my picture book was at the graduate degree shows at the Candid Gallery, London and then at the Ruskin Gallery, Cambridge.  Publishers and agents were invited along to check out us newbies.  From there I had one meeting with a publisher but it came to nothing.

Then it was shown a couple of months later on the Cambridge School of Art stand at the Bologna Children’s Book fair.  I had some nice feedback from a couple of publishers, but again, nothing more.

At that time ‘Luna and the Moon Rabbit’ was a bit different.  Then titled simply “The Moon Rabbit”, it was a wordless picture book.  I wondered if that aspect was hindering me. I never considered myself a writer, and the thought of people reading anything I wrote was more terrifying than showing people my illustrations, so it remained silent.

I’m not a particularly confident person when it comes to my work and, although I knew I should’ve been continuously sending the dummy book off to publishers and agents, I wasn’t. I kept hearing about some of my classmates getting contacted by “lots” of publishers, offered book contracts and signing up with agents.  I was feeling low and was pretty mean to myself.  “Why on Earth would anyone be interested in my work? Who do I think I am?”  I pretty much hid myself away.

The only thing I seemed to be okay with was entering competitions.  They seemed a more impersonal way for me to get my work out there.  I didn’t expect anything to come of any of them, of course, but it was a bit of motivation for me keep going and producing work.

One of the competitions I entered was the Cheltenham Illustration Awards 2016.  To my amazement I was actually picked.  Not only to have my illustration entry appear in the catalogue but also to have that image be part of the exhibition at The Wilson, Cheltenham’s Art Gallery and Museum.  It was a nice confidence booster, but still, not quite enough for me to start marketing myself to publishers.

Then, my friend and classmate, Jane McGuinness, sent me a link to the Stratford-Salariya Picture Book Prize competition.  It looked like the ideal competition for me.  However, it required both images and text to be submitted.  I spent a few weeks not thinking about it, it was the festive season after all.  Then the day before the deadline came and I still had no text.  I decided I had to go for it. I put pen to paper and came up with something.  I arranged it into the dummy book, emailed it off, and then forgot about it.  A few weeks later, Rachel Benge, another Cambridge alumnus, messaged to say I’d been shortlisted!  I was over the moon!  I expected nothing more though.  So when I got the call to say I’d won, I was (and still am somewhat) blown away.

It’s all been rather surreal since then.  I’m still trying to adjust to it all.  I think I’ve become a little more confident now. I’m still a bit apprehensive about approaching publishers but I’m working on it!

Congratulations, Camille! Proof that a little perseverance and generous helping of talent go a long way.