Nowadays, it is all too easy for children to stay tucked up inside their houses looking at the big wide world on a screen rather than going outside and experiencing it for themselves. This inspirational month-by-month journey through the seasons is crammed full of activities and ideas designed to get children out into the fresh air and has been published as part of Nosy Crow’s ongoing partnership with The National Trust. 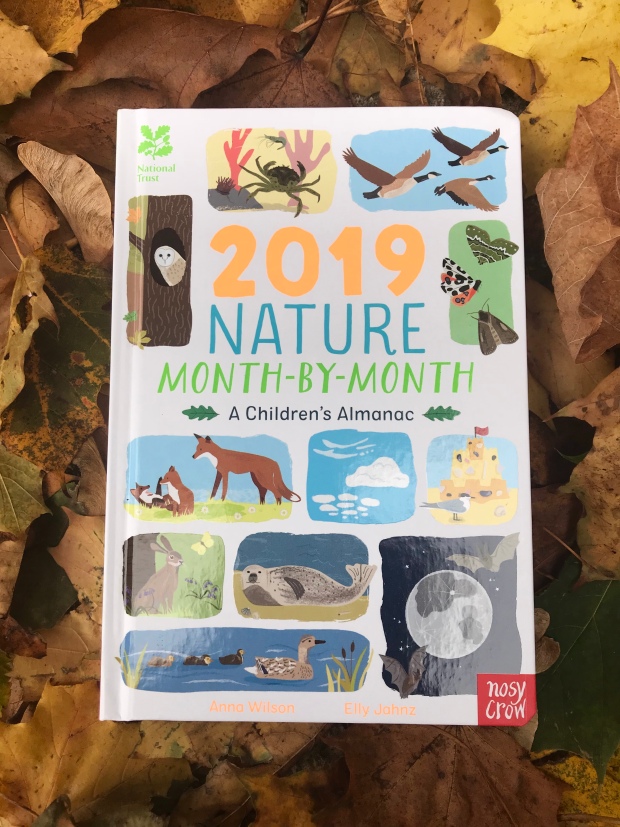 Each section starts with a calendar listing significant events which occur during that month.  The pages which follow are then crammed with seasonal activities, facts and recipes.  Learn to read the stars, spot indigenous species, make moth-catchers and cast animal prints (amongst many more activities!)  There’s also a space for notes and observations for keen spotters to record their observations in. All this is paired with plenty of beautiful illustrations, making it a great gift and something to treasure.

Anna has written a special post describing her top ten things to do as a child.  I wonder how many of them would feature in a child’s top ten now?

Top Ten Things I Loved Doing as a Child

When writing my latest book, Nature Month-by-Month: A Children’s Almanac for 2019, I found myself constantly going back to my own childhood for ideas. I lived in a small market town in Kent and all my close friends were within walking or cycling distance. In the holidays we would meet up on our bikes and only come home for meals. I also have lovelymemories of time at my grandparents’ house where my grandmother taught me to cook and sew and how to make things. So it’s not hard to come up with my Top Ten things to do in Nature!

1) swimming in the sea

When I was a child I lived an hour from the coast and there were plenty of beaches to choose from. Camber Sands was my favourite as most of the other beaches were pebbly. I learned to swim in the sea when I was four. We lived in Australia then, so the sea was pretty warm! My lessons were in a “pool” in the sea, surrounded by shark-proof nets! I have loved swimming in the sea ever since and particularly love it when the water is cold. I have even been known to plunge in on New Year’s Day in Cornwall. I love the way it makes me feel: alive and wild and free.

My childhood home was in suburbia, so I wasn’t exactly running through fields and forests with my friends. However, Nature is never far away, even in the town. At the bottom ofthe cul-de-sac where I lived was a patch of scrubland – it was basically a building site and is now the smarter end of that little housing estate. Between the ages of eight and ten my friends and I would spend entire days playing in this area which was overgrown with brambles and nettles. We called it, rather grandly, The Woods and felt that we owned it. We built dens and played games of cops and robbers, cowboys – even aliens landed in those woods, I’m sure of it! Building dens is still a favourite activity of mine, although now my kids are teens I haven’t done it for a while.

3) riding a bike with friends

The best thing about where I lived was that all my friends were within a five-minute walk of my house. At weekends and in the holidays all I had to do was to run down the road or around the corner and knock on someone’s door and I’d have someone to play with. In the summer we would spend all day outside, mainly riding our bikes to and from The Woods. There were very few cars on the roads in those days so we had the streets to ourselves most of the time. We dared each other to ride “no hands” and sped down hills wearing our anoraks by the hood, pretending we were superheroes in capes. I am still friends with my superhero buddies!

My grandmother was the best person to spend time with when I was bored. There was never “nothing to do” at her house. My favourite activity was to make miniature gardens on a rainy day. My sister and I would run outside and collect as many wildflowers and nuts and twigs as we could before we got soaked, then we’d come in and lay our finds out on the kitchen table. Grandma would give us each a biscuit tin lid and some scoops of soil. She would then let us climb out on to the flat roof over her kitchen to collect gravel and moss. We would spend a happy afternoon “planting” our gardens. Sometimes she would give us a small mirror to use as a pond. We would tell each other stories about who lived in the gardens. I made these gardens with my own kids and have done this as a creative workshop with children in schools and libraries.

Another thing my sister and I enjoyed doing at Grandma’s was making potions. We would be given a jam jar each which we filled with rose petals and lavender and rosemary – anything we could find outdoors which smelt good. Then we’d fill the jars with tap water and screw on the lids. The next day we’d open the lid and take a good sniff. We were convinced we’d made our own magic potion or priceless perfume! As with the mini gardens above, this is a fun thing to do on a rainy day.

Grandma and Mum were both excellent cooks. Every September we would go to the bottom of Grandma’s garden where there was a little lane lined with brambles which would be overflowing with plump juicy blackberries. We would happily spend a long time filling old ice cream tubs with the berries – and eating them as we went along, of course. We’d then take them back to make blackberry and apple crumble or pie or even jam. When I left home, Grandma would send me a jar of her blackberry and apple jam every year until she got too old to make it any more. It is very easy to make. I might include the recipe in my next book!

My Dad loved the river. He grew up near the Thames and learned to row when he was very young. He passed on his love to me and my sister and took us out on the Medway river in Kent. Later in life he learned how to canoe and kayak and he taught us too. We would go out with him on a Sunday morning and he’d point out kingfishers and water voles, ducks and moorhens and cormorants. I still love the river today, butalthough I do have two kayaks, I am more likely to be found swimming in the river than paddling on it!

I have always loved getting up high and looking down on the world. As a child I was lucky enough to be able to climb apples trees which were not high enough to be dangerous, but were exciting to sit in, hiding in the leaves. You get a different view of the world, sitting in the branches of a tree. Things which seem worrying when you are on the ground suddenly become much smaller problems when seen from on high. It’s also a great place to read!

I have always loved autumn. The colours of the leaves cheer me up on even the greyest wettest day. It is raining as I write this, but I am looking out at a stunning copper beech tree which is turning from coppery green to russet, gold and bronze. As a child I would collect leaves which I found on a walk, then bring them home to press between sheets of newspaper which I would put inside a heavy book. I would leave them there for a few days – or longer if I was patient enough – then use them to make greetings cards or pictures. I used to enjoy doing this with my own children when they were small too. It made any blustery autumn walk instantly a lot more interesting.

This is another activity I loved to do on a dark autumn day when my parents were trying to get me and my sister to help in the garden. We would rake up piles of leaves and then jump into the middle of them to make a little hollow or “nest”. Then we’d sit down in the nest and push the leaves into “walls” around ourselves and pretend we were kings and queens in our leaf castles. I think we probably ended up making quite a mess, but it kept us quiet and meant we got lots of fresh air without getting bored while Mum and Dad worked!

Thank you, Anna! That post has reminded me of some very happy memories from my own childhood – I used to spend hours out on my bike with my friends zooming in and out of a huge clay pit in the woods. It’s also reassured me that I do do some of those things with my own children as a balance to their screen time.

As I said, this gorgeous almanac would make a great present for anyone who already loves the great outdoors, or anyone who needs a gentle reminder of some of the wonderful things you can do for free outside.

Nature Month-by-Month: A Children’s Almanac for 2019, written by Anna Wilson and illustrated by Elly Jahnz, is published by Nosy Crow, out now, £9.99 hardback.