Introducing the perfect book to snuggle up under a blanket with now that Winter is drawing nearer. Lose yourself Siberian wilderness full of wolves, ice and magic – Nevertell. 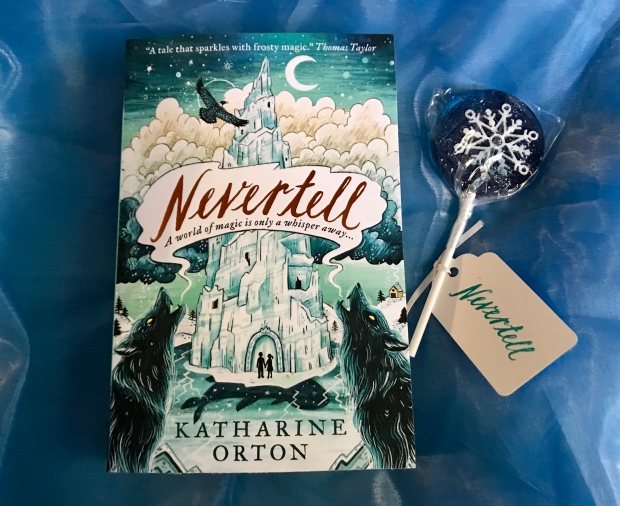 Lina has only ever known life inside the dangerous prison camp she was born in. Life is hard; the rations are meagre and the guards often cruel. But she finds comfort through her work in the greenhouse growing vegetables and in the fact that her mother: the fearless Katya.

When a plot is hatched by some of the other prisoners to escape, Lina makes a run for it with her best friend, Bogdan. But the journey ahead will be hard and full of danger. The pair have the feeling that their travelling companions are not entirely trustworthy, and they are being pursued across the wilderness by a vengeful sorceress and her pack of shadow wolves.

If they are to survive the journey on their own, Lina and Bogdan will need every ounce of courage, kindness and conjuring they can muster.

This was just my kind of book. I loved the grim details of the prison and the lives of the inmates, the descriptions of the beautiful (but deadly) snow-covered landscapes and the sprinkling of folkloric magic which glistened on the pages.

The characters were also wonderfully written so I was interested to read Katharine’s piece about where the inspiration for her characters came from.

‘How the characters in Nevertell came to be,’ by Katharine Orton.

When I was developing the characters for Nevertell, I wasn’t always aware of where their personalities, or traits,were coming from. Some took a lot of work to draw into the light, while others might as well have stood straight up and announced themselves. Another ended up taking my story in a completely different direction to what I’d planned.

To my surprise, the development of many of them didn’t feel like something I was in control of – at least not at the time. It was only when I sat back to take a look at the book as a whole that I could see elements of myself and other people in the characters I’d created. No one character is based on any one person: they are all a huge jumble of traits and attitudes that I’ve noticed in myself and others – both real and fictional – over the years.

Those parts of me were often in surprising places, however. I never, ever thought I would be anything like Svetlana, for example, the vengeful sorceress who chases the main character Lina and her best friend Bogdan across Siberia with a pack of shadow wolves... And yet there she was, talking about how awful humans are to each other and being deeply cynical, the way I can be on my worst days. And on the other hand, there was Lina, braving the wilds of Siberia, and carrying with her my sense of idealism and hope.

Katya – Lina’s fierce and daring mother – is one of those who sprang onto the page fully formed, and I’ve still got no idea where she came from. She came straight out of my head giving instructions and throwing punches, and neither she nor I ever looked back. I can only imagine that she’s made up of pieces of the strong, no-nonsense women I’ve had the privilege of knowing, both as friends and family.

What I wanted above all for my characters in Nevertell was for them to have a sense of personal history: a weight to their personalities that might hint at a life lived off the page. I can only theorise, but I think that part of what made Katya such an instant character was the fact that I knew her backstory so well and could imagine her frustrations. She’d been stuck inside a Soviet prison camp for over half of her life, after all. Who wouldn’t be fed up? A really tricky one who took ages to get right though was Old Gleb, one of a band of thugs and criminals. It wasn’t until I knew his backstory that I understood why he would even hang around with them in the first place.

And then of course, there’s Bogdan. In the first draft of Nevertell, Bogdan said goodbye to Lina at the start, and didn’t turn up again until the end. However, as I went on with that ill-fated draft, I knew something was very wrong. Bogdan should have come, I realised, because that’s what he would want: that’s who he was. It was hard writing that initial draft without him, because of that nagging in the back of my head at every turn, telling me he ought to be there. I couldn’t rest – in many ways, he wouldn’t let me rest – until I’d gone right back to the start and written him into the adventure properly.

So thank you Bogdan, or whatever part of my brain made you, for bringing your friendship and courage to Nevertell. I know (oh, how I know) that you wouldn’t have had it any other way.

Thank you so much, Katharine, for sharing that with us.

Hopefully, you’re now all convinced that you need to get a copy of Nevertell and join Lina on her adventure!

One thought on “‘Nevertell,’by Katharine Orton, cover by Sandra Dieckmann.”