Today I am sharing the creepy, magical tale of a pair of siblings and a house full of secrets: ‘The House on Hoarder Hill.’ I also have a Q&A with the two authors, Mikki Lish and Kelly Ngai, about the pros and cons of writing as a duo and where their inspiration cane from. 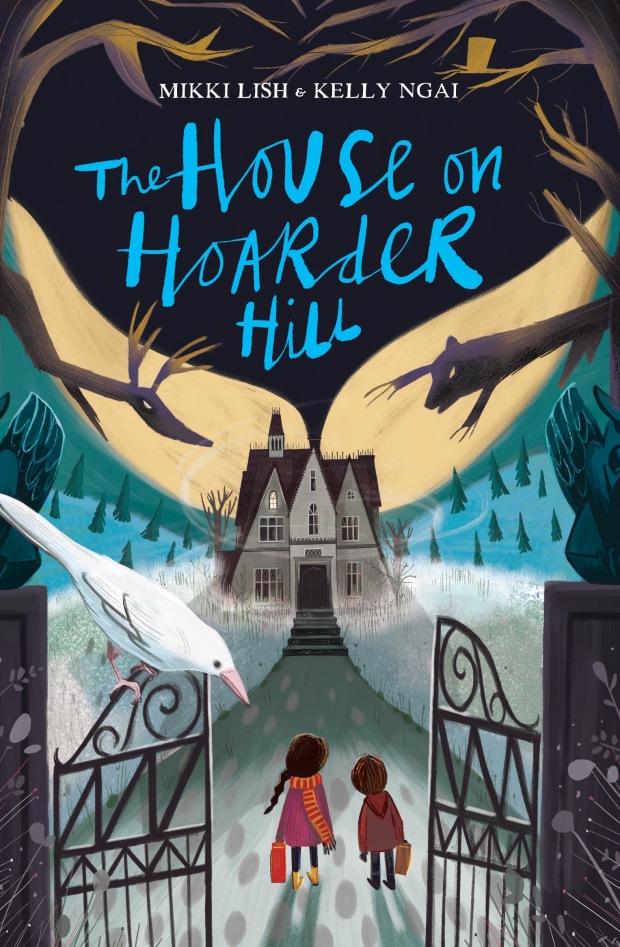 Hedy and Spencer haven’t spent much time with their grandfather so they are not impressed when they have to go and stay there in the run-up to Christmas whilst their parents go on an archaeological dig in Spain.  Grandpa John had once been a famous magician, but since the mysterious disappearance of their grandma, he’s stopped performing.

In a house full of secrets and magical objects it’s not long before some strange things start to happen – messages written in the dust by an invisible hand, strange moving lumps in the wooden floor…

Will the pair be able to solve the mystery without disturbing the magical inhabitants of the house? What is their grandfather hiding from them? And since when could mounted deer heads and bearskin rugs talk?!

Such a fantastic read – the story beautifully built the sense of mystery surrounding Grandma Rose’s disappearance with one character in particularly adding a really quite dark and malevolent layer to the story. This was counterpointed by moments of real humour, lowering the tension level, making it perfect for older children who want a scary read but not nightmares!

It was also refreshing to read a story about magic set in the real world and based around magic as we know it – stage shows, sleight of hand and showmanship. But is that all magic is? Just trickery? Or do magical objects truly open portals to other dimensions?

Now it’s time to hear from the story’s creators, Mikki and Kelly:

1. How did you come to be writing together?

We have an amazing soul in our lives, named Doug. Mikki worked on the film ‘Wolverine’ with Doug (calm down ladies! Yes, Hugh Jackman IS a wonderful human) and feels Doug could be a brother; and he actually is Kelly’s brother. It’s no coincidence that there is a character named after him!

Mikki had been toying with some kid show ideas and reached out to Doug to see if he would be interested in developing them. He elbowed Mikki to his sister Kelly, saying “This is more her thing.” Mikki’s reaction was along the lines of, “Oh GAWD! Flicked to ‘the sister’!” But it turned into a meeting of minds, ideas, creativity and an incredible partnership was formed.

2. What challenges/ benefits do you feel this had compared to writing alone?

Mikki: Quite honestly – I have worked on numerous ideas, but never went on to develop them further, as I always had some ‘other’ shiny object spin into my atmosphere. So it’s been wonderful to just focus and work on 1 – 2 ideas at a time, instead of 10.

Benefits! – my list is endless. Working with Kelly has been a God send. She has a unique vision, ridiculously talented, and very organized as to the ‘rules / breakdowns that need to happen etc’ where I am just a cyclone of ideas/ suggestions etc.

Kelly: It’s motivating. When there is no-one expecting anything out of you, it’s easy to be lazy. Knowing Mikki is waiting on pages forces me to write even when I’d rather sloth out on the couch with Netflix. It’s like the gym – the hardest part is starting. Once you’re doing it, you feel great.

We also shore each other up. The journey of writing a book, getting an agent, getting a book deal, editing the book and so on is a marathon. Throw TV development into the mix and it’s a fun but long ride. When one of us is at low ebb, the other pulls the sled for a while.

The main challenge is juggling the time difference due to working on different sides of the world.

3. The House on Hoarder Hill was originally written as a screenplay. Were any changes or additions made to make the story work as a book?

We had begun wiring it as a TV series, but had only gotten as far as Ep 3 or 4 when a producer suggested writing it as a book; he loved the characters so much that he wanted to ‘know’ them on a deeper level. We were really only a quarter of the way through the story when we switched focus to writing the book.

The main change is perspective. For instance, in the TV series we had written in some flashback to show Grandpa John’s days as a magician – but the book is told from Hedy’s perspective, so getting a sense of Grandpa’s stage magic had to be a second-hand experience. We also condensed things in the book to make it a taut story for middle-grade readers. Jelly originally had two brothers instead of one, and there was some story told outside Hoarder Hill that we decided to cut for pace.

4. I loved the powerful fusion of stage and ‘real’ magic at the centre of the story. Did you do a lot of research into magicians and their magical objects to create your story?

Mikki: When the initial idea of THOHH came to light, I coincidently was visiting The Magic Castle in LA, and a magician, Eric Jones was one of the performers. I watched his show, and for the first time felt I was watching MAGIC rather than a trick or illusion. I approached him after the show and to cut a long story short, he was kind enough to meet with me the next day for lunch, along with a fellow magician, Charlie Caper. They allowed me to ask anything I wanted to know – and I also asked them what their ‘mistakes’ were during a live performance. So my ‘witnessing’ what I believed was magic was a big influence on that narrative of the book.

Kelly: Just desk research for me! Thank goodness for the internet.

5. The reader was shown how magical objects could be portals into different realms – some slightly sinister. Why did you want to give this story a dark edge?

Character! We needed to show that there was good reason for Grandpa John to be fearful of magic. Magic is really his calling in life, and yet he shuns it because he’s seen the dangers it can present. For that element of his character to be believable, we felt we should explore the darkness a bit.

6. Did any of your own childhood reading influence the path “The House on Hoarder Hill’ took?

Mikki: Mine would be a nope unless the fact I loved reading Agatha Christie and The Muddle Headed wombat mysteries crept in! –  for me … the idea just presented itself in a very vivid way.

Kelly: CS Lewis’s Narnia books are definitely an influence, in that ordinary objects in the children’s homes connect them tomagic or magical realms. And Roald Dahl’s ‘The Witches’ inspired one particular critical plot point – I won’t spoil it for those who haven’t read our book yet, but the clue is ‘Solveg’!

Excitingly, ‘The House on Hoarder Hill’ is soon to be broadcast as a television programme. Make sure you read the book before you watch the show!

*Many thanks to the team at Chicken House Books for inviting me to be part of this blog tour. Make sure you take visit the other stops on the blog tour too*