With the Stone Age a firm fixture on the primary school national curriculum, it’s always useful to have some new texts up your sleeve to use along with tried and tested favourites. Today I’m going to share with you a selection of titles I’ve been sent which would fit well with a Stone Age topic at school or be read just for enjoyment’s sake.

The Grumblies just love to argue. They can’t agree on how to do anything – including the best way to ward off a raid from hungry Gobblestomp’s. Unfortunately, this means that the very thing they’d been trying to prevent actually happens. A Gobblestomp charges in and chomps all the bread rolls from the bread bushes and all the squidgy-fruit growing on the trees. Maybe it’s time the villagers stop grumbling and start working together as a team.

A funny story about the importance of teamwork. It would also be interesting to share this with children’s and discuss whether they think this is an accurate depiction of Stone Age life. 3+ 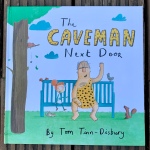 ’The Caveman Next Door’ by Tom Tinn-Disbury (New Frontier Publishing)

What would you do if a caveman moved onto your street? Well, Penny decided to show him around. They visited the library, the park and a restaurant, but it’s hard fitting on to the modern world. Ogg seemed to constantly be getting things wrong and upsetting people. Maybe Off might have better luck visiting Penny’s school? Perhaps he could learn some new words? 4+

A funny story exploring how to fit in to new surroundings and make friends. It would be great to use in school and write an alternate version – what differences and difficulties might Penny experience if she visited Ogg’s world?

In a world where weakness is frowned upon and where luck favours the brave, young Wolf struggles to fit in. After an eagle makes off with one of Wolf’s family’s lambs when he was supposed to on the lookout, Wolf is determined to make amends for his mistake. A chance encounter with a neighbouring chief’s daughter and a stolen sacred spear marks the start of an adventure which will take Wolf out of his village (now known as Skara Brae) and into the unknown.

A gripping Stone Age adventure based in the village of Skara Brae and packed with illustrations. 7+

Charlie has been so excited about the imminent arrival of his new baby brother, that when he’s born with a heart condition, Charlie doesn’t know how to cope.

He runs to the one place where he can shut out his troubles and fears – the forest. But this time something’s different. Charlie finds a boy laying in the river. A boy who dressed in deerskins and carrying a lethal-looking spear. And the first has changed too – it looks older and wilder.

Together, Charlie and the Stone Age boy set out to find the courage to fix their families and find their way back home. A truly heart-wrenching, thrilling read full of adventure, peril and ancient wildness.

This fascinating information book explores what it means to be human and the journey modern man took to get there. From our earliest primate relatives, to making tools, discovering fire and creating homes – all is explained using a combination of text and illustrations.

It was interesting to learn how Homo Sapiens are believed to have left the African continent and migrated elsewhere and how this could have caused the mass extinction of megafauna. Hunting, farming, settlements and medicine are also explored.

A really useful book for older readers interested in the evolution of man. 8+

I hope you’ve all found something to enrich or refresh your existing Stone Age curriculum – happy reading.