I have just finished ‘My Brother is a Superhero’ and it’s as funny as I’d hoped!  Full of subtle (and not-so-subtle) superhero gags, a fantastic read for all those hoping to start out as a superhero and save the world one day!  Long reign Star Lad!

I love a superhero book and this one promises to be hilarious! It’s all about comic-obsessed Luke and his nerdy brother Zach.

Luke’s biggest regret in life is needing a wee just at the wrong moment.  While his gone a mysterious aliens gives his undeserving brother superpowers and tells him to save the universe. Despite his raging jealousy, Luke and his friends rush to the rescue when Zach is captured by his arch-nemesis!

Look out for my review soon.

There’s also a cool arcade game app available to accompany the book  called ‘My brother is a superhero.’ 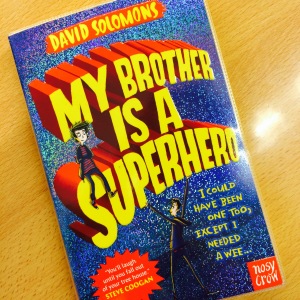 2 thoughts on “‘My Brother is a Superhero’ by David Solomons”