Holly Sparkes was just a normal girl until a freak accident gave her a dangerous and strange superpower, turning her into………..Electrigirl!

With a campaigner mother, a military father, and a superhero-obsessed younger brother,  Holly is a typical tweenager who just wants to hang out with her best friend, Imogen.  That is, until Imogen becomes obsessed with playing QuizTime games on one of the new mobile phones given to the whole town by the slightly sinister CyberSky corporation.

Imogen soon stops talking to Holly, or anyone else for that matter.  What’s happened?  Can Holly and her brother get to the bottom of the mystery before it’s too late? 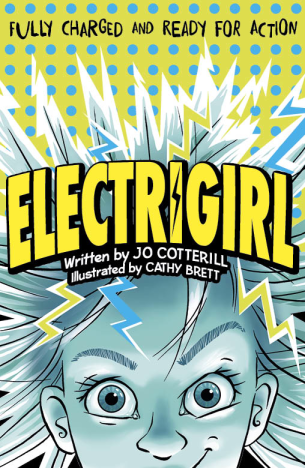 This fantastic book is a clever mix of story and comic strip (illustrations by Cathy Brett) which will appeal to all readers aged 8+.  It’s great to have a superhero book with a young girl as the lead character.  Highly recommended!