Tommy’s in Hell. Literally. Ever since she was sucked down into the afterlife, all the locals have refused to accept her. She may have saved Hell from carnivorous carousel horses and hoardes of hell-beasts, with the help of her best friend, Jinx (the actual spawn of Satan) but the other demons just won’t accept a twelve-year-old Bonehead living among them.

Desperate to prove herself, Tommy enters a diabolical tournament.  All is not as it seems; the evil Lilith (Jinx’s Stepmum) has a few devilish tricks up her sleeve. Will Tommy give up? When Hell freezes over! 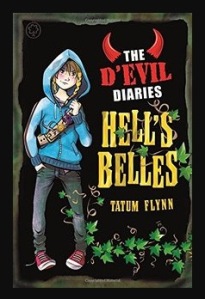 This action-packed adventure is full of clever jokes, daring deeds and dastardly plots.  It’s sure to appeal to lovers of adventures and comedies alike.  An original concept for a children’s book; it can’t fail to engage older readers.

‘Hell’s Belles’ is the second book in the brilliant ‘D’Evil Diaries’ series.  Look out for it in all good bookshops!