When I spotted these two ‘Bad Guys’ were being released in May, I just had to get hold of copies for myself.  Thanks so much to Scholastic for sending me some to review.

My eyes were initially drawn to the attention-grabbing colours and cool illustrations on the front covers.  And I wasn’t disappointed when I looked inside; the pages were packed full with brilliant illustrations and quirky text layouts. 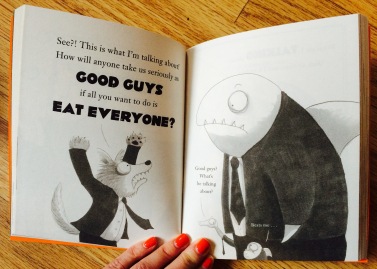 In Episode 1, Mr. Wolf is fed up of being labelled as ‘bad.’  He wants to break free from his granny-munching image and do good deeds.  All he needs are some like-minded reformed characters to join his gang of do-gooders.  Stand up: Mr. Shark, Mr. Snake and Mr. Vampire Sardine, sorry, I mean Mr. Piranha!

The only problem is, the gang’s unconventional good looks (and initial unwillingness to change their wicked ways) mean that their chosen ‘rescuees’ would often rather stay where they are (in mortal peril), than be rescued by a razor-toothed shark.

Will these Bad Guys ever be allowed to become Good Guys?

Episode 2 – Mission Unpluckable sees our Bad Guys continuing to struggle to prove to the world that they really aren’t as bad as they’re made out to be.

A slightly manic  Mr. Wolf comes up with a plan to rescue a flock of mistreated battery hens from the maximum security Sunnyside Chicken Farm.  The problem is, the farm is known to be impossible to break into.  That is, of course, unless you have the computer-hacking skills of the tarantula, Legs.  Another Good Guy with a bad reputation.

The appearance of a bare-bottomed tarantula makes Mr. Shark start hyperventilating, but Legs could just be the key to a successful rescue mission which would prove to the world, once and for all, that Mr. Wolf and the gang really are GOOD GUYS!!! (Apart, perhaps, from Mr. Snake who is struggling to control himself at the thought of a factory crammed full of juicy chickens.)

I absolutely loved this perfect pair of books.  They’re packed full of clever humour and witty asides which will capture readers of all ages.  I really enjoyed the cultural references and in-jokes, which were complemented perfectly by the excellent illustrations.

Library Boy Jr. devoured both these books in one sitting.  And, after chuckling, his way through them both, declared them, ‘The funniest books ever!’

This series is a sure-fire hit and I can’t wait for episode 3 to be published!