We are very excited to be included in the blog tour for the action-packed, ‘The Inventory – Iron Fist’ by Andy Briggs.  Thank you to Faye Rogers and Scholastic Publishers for inviting us to participate.

In this post, we bring you a review of the book and an awesome Question and Answer session with screenwriter, producer and author, Andy Briggs (no spoilers for book two – we promise!  Just awesome gadgets!) 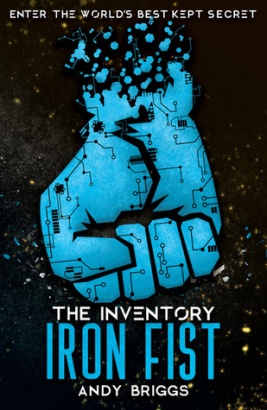 Living in the world’s strongest vault, which houses technology you could never imagine in your wildest dreams should be the perfect life for a young boy.  But not so for Dev.  Unpopular at school and lonely living with his distant uncle, Devon Parker can’t wait until he’s old enough to leave the high-security compound and do precisely what he wants to.

His best friend is Eema, a beyond state-of-the-art artificially intelligent computer system who is there to look after Dev and help protect the inventory of amazing gadgets secured within the vault from the outside agencies who are desperate to get their hands on them.  HoverBoots, HyperBalls and the sought-after Iron Fist are all buried deep within the inventory but The Collector will stop at nothing to get them.

When an armed militia manage to infiltrate the base, Dev and two fellow students are all that stand between them and the Iron Fist.  Can they stop the mercenaries before it’s too late?!

A brilliant, gadget-packed read which draws you in and has you flying alongside Dev on a OmniBoard as he races against time to discover the true secrets hidden deep within the bowels of the vault.  Go grab yourself a copy!

We were lucky enough to be able to collect questions from a group of very excited young readers to pose to Andy Briggs.  And here’s what he said……

Many of them! At least the foundations of the gadgets are. In The Inventory, Dev rides on an Omni-Board. The closest we have right now is this:

It’s not quite the same, but it’s pretty cool! Another one of my favourite pieces of tech are the silent Iono-engines. These fascinate me as – on a small scale – they are real. They’re incredible, and still baffle scientists as to exactly how they work. It also begs the question as to why people don’t like talking about them. Check out this clip (and the others) on YouTube, then ask yourself why your can’t find these in scientific text books:

Sadly not too many. One of the most exciting gadgets I have ever tried was an underwater bike – imagine a jetski, with an oxygen dome on top. Sadly I don’t have a photo, but it’s a bit like this: 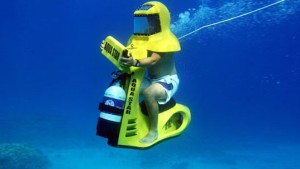 In the book there is a machine that tears people down to their atoms and propels them through the earth – only to reassemble back to their proper form once when they arrive at the other end. I wanted to create something different from teleportation as we’ve seen that a lot in fiction, most famously in Star Trek. I do wonder if one day we couldn’t all be digitized and piped through a cable and reassembled on the other side of the planet. I think that would be pretty cool!

In the old Marvel and DC comics they had adverts in the back pages for x-ray specs, hypno-rings, instant muscles, nuclear submarines – practically anything that was both implausible yet very cool! I used to send off for them and was always disappointed when they arrived and were a rubbish piece of cardboard. Of course I put the blame squarely on the government. They must have a giant warehouse in which everything was diverted from my mailbox and stored away so I couldn’t play with it. This idea has always been noodling at the back of my head, and now I’m delighted to be able to share it.

I don’t have a favourite type of book, I tend to read as broadly as possible. However… I do have a guilty pleasure in reading Clive Cussler and Michael Crichton books when I am allowed to escape for a holiday…

I knew somebody with this condition. It was almost magical speaking to them as they described working out maths problems with sounds and colours. For this particular person it was natural, not a disability, and it did sound rather amazing to me. I am sure it’s a terrible problem for some people. If I did have this condition, I would have to have Dev’s unique gift… which I don’t want to talk about for people who haven’t read the book! However, I have just finished book two and created something even more… wow…

I’m old enough to remember the first “test tube baby” on the news (although I was young at the time!!), and the cloning of Dolly the Sheep, so science is getting there. There is already concern of “designer babies”, the ability to chose if your son or daughter has blonde hair, blue eyes, dark skin, etc – which is kinda scary. I was just reading an article about test tube grown meat (!). Imagine eating a hamburger that was made entirely artificially… apparently they taste great and no cows suffer. So yes, not only will it be possible – you and I are already living through the age in which it will occur.

Ha, ha, ha… I have just finished the manuscript and… well, it follows on, but is a very different stage, with more twists, turns, puzzles and mysteries. That’s all you’re getting! I don’t think I can even tell you the title yet!

Well, it would be nice to see him again….

They’re very different prospects. With books you have an infinite canvas. It can be as many pages as you want. With a movie you have 90-120 pages to tell the whole story. Books allow you to dip into the character’s mind, thoughts, desires and feelings. In a movie we can only judge by action (or lack of) and dialogue. I often hear of people complaining that the film is not as good the book, that’s usually because so much has to be stripped, merged or changed to make it work in a “shorter” space. I have adapted a number of books for potential movies and there is nothing scarier than sitting with the lovely book author who is about to say exactly what they think about me cutting up their marvellous book…

Now, that is such a leading question… Dev has a lot more to discover. A lot.

Well we don’t know about you, but that interview has certainly whet our appetites for book 2.  And has made us want to rush out and buy some HoverBoots!

3 thoughts on “‘The Inventory – Iron Fist’ by Andy Briggs”