I is very excited to have gotten my trotters on a copy of the hilarious fourth book in the fart-tastic Pig series.  You can too if you read to the bottom to find out how to enter my fabulous book bundle giveaway! 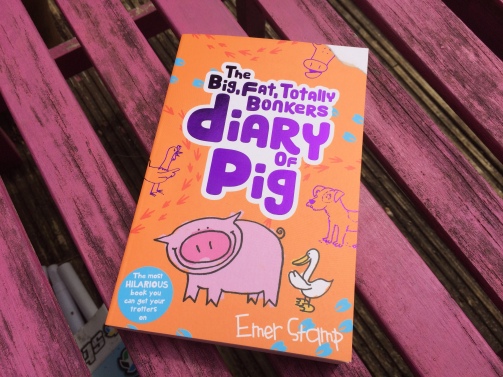 This instalments finds Pig on the run from Deathra (armed with tasers and wearing hazmat suits) after being falsely accused of eating his feathered turkey friend, Ki-Ki.

With the help of his farmyard friends and the three-legged military dog, Rusty, Pig soon discovers that he is the victim of yet another plot by the Evil Chickens!

It’s race against time to clear his name and rescue Ki-Ki before he becomes fox food and the Evil Chickens take over the farm.

Absolutely packed full of the madcap humour and farts (there are A LOT of farts) which have made these books so popular with children. You can’t help but be whisked along on poor Pig’s adventures as he stumbles and bumbles (and farts) his way towards saving the day.

The Chalk Ridge Primary School Librarians were lucky enough to ask Emer some questions about her books.  Here are her responses:

1. What inspired you to write about Pig?

I grew up with Pig – in real life he was called Saltpork and he lived on my parents’ farm. We knew exactly what was going to happen to him, but of course he had no idea. I started to wonder what would have happened if he had twigged. The series was built out of that tiny ponderance.
2. Why did you choose the chickens to be evil and not another animal, like the sheep for example?

I didn’t chose them, they chose themselves. Chickens are an evil bird. Have you seen their coal-black eyes? Have you ever been pecked by one of their razor-sharp beaks? Have you noticed how you’ll always find small groups of them congregated in dark corners plotting and scheming? I have.

3. Where did you grow up and how did it help your writing?

I grew up on a farm. This has helped the writing of Pig ENORMOUSLY. Most of the characters are based on animals from the farm. Take Rusty the new character in Pig’s 4th diary – he’s named after a crazy, daredevil Jack Russell my Dad once owned.

4. Have you always wanted to be a writer?

No. When I was a child I wanted to be a vet. But I failed my biology A-Level spectacularly, so I had to park that idea. I was good at writing and drawing so I pursued that instead. Until recently I was an advertising creative writing and art directing TV, Radio and Print adverts. Thanks to Pig I gave that up two years ago to be a full-time author; well, full time as much as you can be when you have two children under the age of three.
5.Why did you pick Pig to be the main character?

Pig picked himself. He popped out of my head and onto the page just as he is. I now realise, as I start writing other stuff, what a lucky event that was.
6. Which authors inspired you when you were younger?

Growing up on a remote farm meant plenty of time to read. I pretty much read anything I could get my hands on. Roald Dahl, Dick King Smith and Enid Blyton where my mainstays. Back last century, when I was a child, there wasn’t the huge choice of books and authors there is today.

Pig language is based on Devonian. He sounds a lot like the neighbouring farmer, Herbert, who used to live across the valley from my parents.

8. Are any of the animal characters based on real people?

Yes. I always use people as inspiration. Kitty in Pig’s 2nd diary is based on Frank Underwood from House of Cards. The seagulls in Pig’s 3rd diary are based on a builder I know who has funny nicknames for everyone. Rusty in Pig’s 4th diary is a cross between my boxing instructor, Bear Grylls and my literary agent James Catchpole (Rusty is missing a leg just like James).

9. Are you only going to continue to write about Pig, or do you have other stories to tell?

I love Pig and would like to think this won’t be the last book. But I am working on some new projects and they are taking precedent at the moment. One of those is a bid to get Pig onto TV, watch this space…

Pig on TV?  Just imagine!  In the meantime, to win a brilliant bundle of all four Pig diaries, all you have to do is comment on this post with the next animal character you would like to see in a Pig story.  Winners will be selected on Monday 19th June 2017.  If you are aged under 16, please gain parental consent as you will need to give an email address to enter.

For my review of the other Pig titles, please click HERE.

If you would like to read more about Pig and his adventures, other interviews with Emer Stamp and enter more giveaways, be sure to visit other stops on the super-amazing blog tour.

6 thoughts on “‘The Big, Fat, Totally Bonkers Diary of Pig,’ by Emer Stamp.”