Now that Autumn is officially with us, I thought I’d share some titles which sum up the very essence of the season: squirrels, sticks and hibernation!

Rodney is a champion nut cracker, so the task of cracking three nuts should be easy,

right?  Wrong!  The third nut just won’t crack despite Rodney’s very best efforts.  With his reputation at stake, the desperate squirrel tries more and more ridiculous methods – a digger, a crocodile, TNT?  But still, the nut stays shut.  Just when Rodney’s on the verge of cracking up, after a day and night of frantic nut-cracking antics, it pops open of its own accord, proving that sometimes all you have to do is wait!

This tale provoked a lot of giggles as Rodney’s attempts got more and more over the top – the rhinoceros pooh was a particular favourite!  The bright, almost comic book style illustrations were also a huge hit and much pored over. 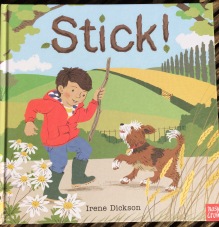 ‘Take a stick, a very useful stick.’ For me, this picture book sums up one of the very great pleasures in a young child’s life – a good stick.  I have a large pile of sticks too precious to leave behind piled up by my front door by my sons.  And, just as in the book, they have been hiking poles, drumsticks, swords and pencils.

With beautiful illustrations and simple vocabulary, this tale of a boy and his dog is an ode to the stick and a great conversation starter with children.    Perfect for little ones who just love being outside in the great outdoors.

Bear and his furry friends are snuggled up in cave ready to hibernate.  Everyone is

happily snoring away.  Except for Bear; he just can’t sleep when he’s being used as a giant mattress so checks himself into a fancy hotel.  After a long, hot shower, in the mini bar and snuggling up alone in a big, comfy bed, Bear still can’t sleep.  There’s a strange empty feeling in his stomach and only one thing will fill it…

As a mum who often ends up being used as a human mattress, I could empathise with Bear’s dilemma.  I do think, however, that I would have been a little more grateful of a night away by myself in a posh hotel!  That said, there is also no better feeling than getting back home to the people you love, even if they are a little stinky and noisy!

With vibrant and humorous illustrations, this heart-warming tale is sure to become a bedtime favourite.

If only humans could hibernate….