This blog post is celebrating the fourth and final gripping instalment of The Inventory series – an action-packed bundle of books, crammed full with high-tech gadgetry and dastardly villains.

Without giving too much away, Dev is struggling with having learnt the truth about his troubled past deep in the Black Zone of the Inventory. He is, once again, called upon to defend what must surely be the world’s largest warehouse of futuristic and banned tech. With the murderous ‘Collector’ back and in possession of Winter Storm (a deadly swarm of biobots), Dev is struggling to know who he can trust as those around him become infected and fall under The Collector’s control.

As predicted, this book is proving just as gripping as the rest of the series. I’m not going to give away any spoilers, but hold on to your hats!

For my reviews (and some other very special content) of the other brilliant books in this series: Iron Fist ,  Gravity,  and Black Knight , follow the links and enjoy!

I am thrilled to welcome author, Andy Briggs to my blog as he share his thoughts on writing in a time where science is moving almost as fast a writer’s imagination:

A few days ago, I watched a video on Facebook showing a guy speeding around over a beach with a jetpack. A real honest-to-goodness jetpack. No wires or trick photography. In my second Inventory book, GRAVITY, I had a bunch of bank robbers using exactly that piece of technology. Last week I watched the Space X launch as Elon Musk put his old Tesla electric car into orbit. Only last year I had been researching the possibilities of private space companies putting heavy objects in orbit for the third instalment of the Inventory series, BLACK KNIGHT.

And now I have the last Inventory book out, WINTER STORM. And, without giving too much away, there is some new tech in there that I haven’t used in the previous books. There’s a lot about cloning, nanobots and bits about manipulating people remotely. So, of course, I have just been reading news articles about the first cloned monkeys born in China and the CIA’s experiments to create remote controlled insects that can spy on people.

And yes, these are real things! 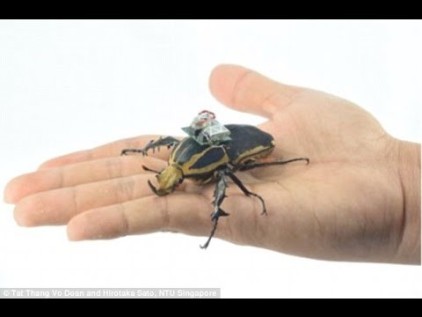 And that’s the unusual period of time we writers find ourselves in. As swiftly as we imagine things, they may already be happening in some form or other. Create a new piece of technology that is simply impossible, such as an invisibility cloak, and rest assured there is somebody in a lab somewhere, cackling like a supervillain, because they have just made a breakthrough creating exactly that…

It sometimes feels as if we are writing the future. Almost as if hammering out those words on a page rewrites reality so such things can happen. Of course, there have been massively influential writers who have shaken the world – such as Arthur C. Clarke who invented the concept of satellites. And it’s no secret that books have changed the world.

Sure, most of us can only dream of being such visionaries, but it really highlights what is happening here. Books are vessels that carry ideas, knowledge and questions; they’re like a virus unleashing their payload into our imaginations. Distributing ideas that drive the world forward. From books like mine, comics, picture books, or epic intellectual dramas, they’re the author’s ideas that shape the future by inspiring others – the ones with the talent – to actually go out there and make a difference.

And thinking about that really brings home the power of reading and writing. I do a lot of book tours in schools around the country, and my aim is to show the pupils the joys of writing – from songs to books to films to games. It’s all writing, creating, dreaming and imagining… it’s all about making the future a thing of the past.

Andy Briggs is the bestselling author of the gripping, tech adventure series The Inventory. Published by Scholastic, the fourth and final book in the series is Winter Storm – out February 1st, it’s time to reveal all of The Inventory’s secrets.

I wonder what will be dreamt up next…?

Many thanks to Andy Briggs for writing this guest post and to Sarah Olley for inviting me to be part of this blog tour on behalf of Scholastic.