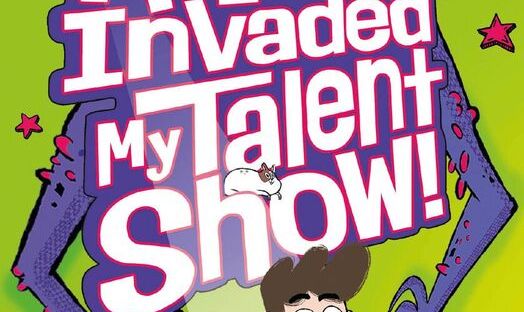 Help! Aliens have invaded my blog! This is all thanks to the blog tour for Matt Brown’s latest book: ‘Aliens Invaded My Talent Show!’ Make sure you read Matt’s lowdown on his favourite aliens (good and bad!) 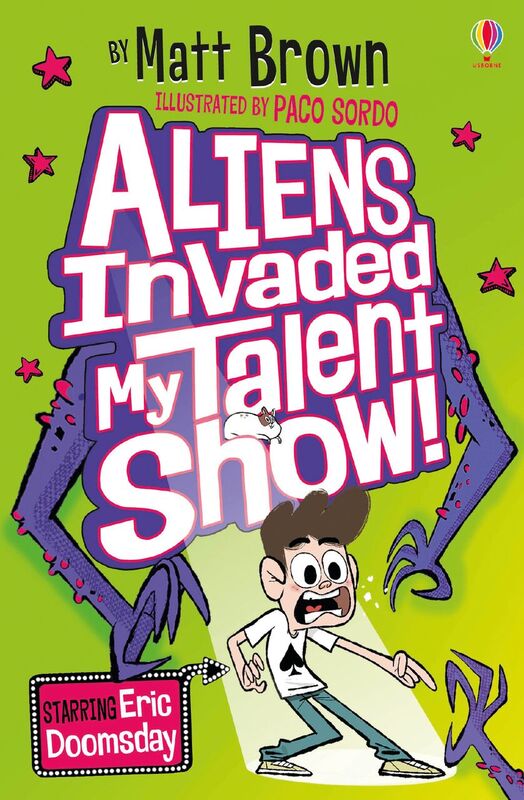 Eric Doomsday just loves doing magic tricks.  His best friend, Vinnie Mumbles, thinks they’re ace – even if they do have the tendency to go a little bit, erm, wrong occasionally! An excellent example of this is when Eric tried to liven things up at super-popular Hattie Lavernock’s birthday party and ended up causing a fondant icing-based fiasco!

However, an opportunity soon arises for Eric to prove the world (well, school) just what an amazing magician he is.  Faced with a visit from the dreaded Inspectors, Eric’s Head Teacher decides that the school should hold a talent show to demonstrate just what outstanding students they have.

Predictably, things don’t go entirely to plan.  There’s something slightly odd about the ‘Inspectors’ and their very retro eighties ensembles. Something that no one can quite put their fingers on…..

When it falls to master magician Eric Doomsday to save the day, you can guarantee things won’t run smoothly.

Full of the crazy slapstick humour you would expect from Compton Valance creator, Matt Brown.  I also liked the wry nod given to the panic created by the threat of a visit from the Ofsted Inspectors – much more so than that of an impending  alien invasion!  All the craziness is perfectly captured in Paco Sordo’s zany illustrations.

Talking of alien invasions, I am delighted to welcome Matt Brown to my blog to tell us about some of his favourite ever aliens.

I can’t remember a time when I didn’t think about aliens.  What do they look like? What do they eat?  Do they wear corduroy? So, writing the book Aliens Invaded My Talent Show! allowed me to answer these questions and a whole lot more because I got to create my own aliens.  And let me start by telling you something on the subject of ‘what aliens eat’.  The aliens in Aliens Invaded My Talent Show! find the idea of us eating something that comes out of a chicken’s bottom, absolutely revolting!  Actually, when you think about eggs like that, they do seem pretty disgusting.  Disgusting but oh so delicious.

But where to start when you need to create a whole new species of alien life.  Well, the aliens in my book couldn’t have come into my brain without a lifetime observing aliens by reading comics and books, and watching TV shows and movies.  So here is a list of my favourite aliens.

I first came into contact with Ming when I watched the 1980s classic movie, Flash Gordon. This film is AMAZING for two key reasons.  One, because of Brian “Gordon’s Alive” Blessed.  If you’ve seen the film you’ll know why I love him so much.  Two, Ming the Merciless played by Max Von Sydow.  Ming is an evil dictator who kills anyone who stands in his way.  There’s a scene at the beginning of the film which I – ahem – borrowed for the scene in my book where you first see the aliens.  In it, Ming the Merciless discovers the planet Earth and, using a crazy weather machine, causes havoc.  It’s the Earth seen through the eyes of an alien and is utterly brilliant.  Like all the best alien stories, Flash Gordon examines what makes humans, human.

I used to love watching Looney Tunes cartoons when I was a kid.  Bugs Bunny, Daffy Duck and Elmer Fudd were my favourites but I especially loved the episodes that featured Marvin the Martian.  Marvin was an alien from Mars who was determined to blow up the Earth because it spoilt his view of Venus.  Marvin was one of the first times that I saw aliens and outer space being played for laughs and I LOVED it.

In 1957, John Wyndham published the Midwich Cuckoos, the story of a bizarre alien invasion set in a small English village.  In the book the aliens are children who have extraordinary telepathic powers.  They become aware that they are under threat from humans and so fight back to protect themselves.  It is strange and wonderful and scary as hell.

I first became aware of the book when I saw the film adaptation, the Village of the Damned.  The aliens are made to look sort of human but also strange an otherworldly too.  They absolutely terrified me.

Good aliens (they come in peace)

You’d have to have a heart of stone not to love E.T.  It was one of the first films I saw in a cinema and one of the first I wept in.  There is something so brilliant about E.T. that draws us in from the beginning.  We have to look beyond the strangeness of his head and the way his body shuffles around, and instead warm to his curiosity and love for Elliot.  As I got older I saw that both E.T. and Elliot were after the same thing, they both wanted to go home and be reunited with their parents.  E.T. had been accidentally left behind by his spaceship and Elliot was trying to deal with the divorce of his mum and dad.  My parents divorced at about the same time that I saw this film, when I was about nine and I think I understood exactly how both Elliot and E.T. felt.

I have always been a massive telly watcher and loved American TV shows.  Mork and Mindy was one of my favourites.  Mork, the alien, lived with Mindy, the human, and each week filed a report back home explaining some new aspect of human behaviour.  It was a brilliant idea and showcased the extraordinary comedic talents of Robin Williams for the first time.  I became a lifelong RW fan and loved him in everything, even the terrible films he made (and he made a lot of terrible films).

During English lessons in primary school, we would often watch a TV show called Look and Read.  Look and Read showed a different drama every term and, I think, really helped me to fall in love with stories.  There were lots of great stories on Look and Read but the one that stuck in my head was called The Boy From Space.  In it, an alien boy, Peep-peep, was helped by two earth children to escape the clutches of the sinister Thin Man.  This was terrifying stuff for the eight-year-old me but I think it forged a lifelong love of aliens and horror.

I’m sorry if I haven’t mentioned your favourite aliens but I could have included dozens more.  Anyway, thanks for reading and I hope you enjoy my aliens in Aliens Invaded My Talent Show! It’s out on June 28th.

I, personally, would have liked a shout out for the Men In Black for all the sterling work they do defending our galaxy, but I guess they technically aren’t aliens themselves. Nevermind!

Many thanks to Matt for taking the time to write this post for the ‘Aliens Invaded My Talent Show!’ blog tour and to Liz Scott and Usborne for inviting me to be a part of it.  Make sure you visit some of the other stops too. 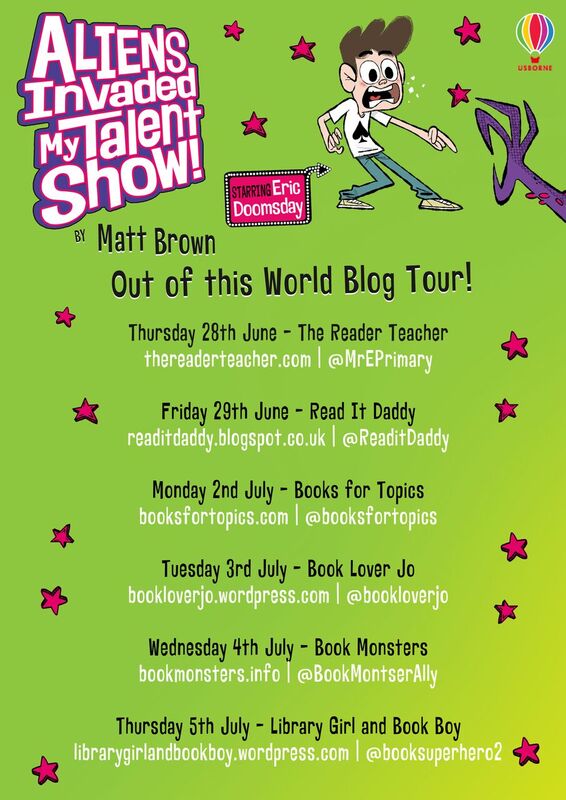