Welcome to my specially updated post, all ready for the #TheTrainToImpossiblePlaces blog tour.  As well as my original review, I’m also honoured to host an exclusive post by P.G. Bell, explains how this magical tale from orally told bedtime story to published book. 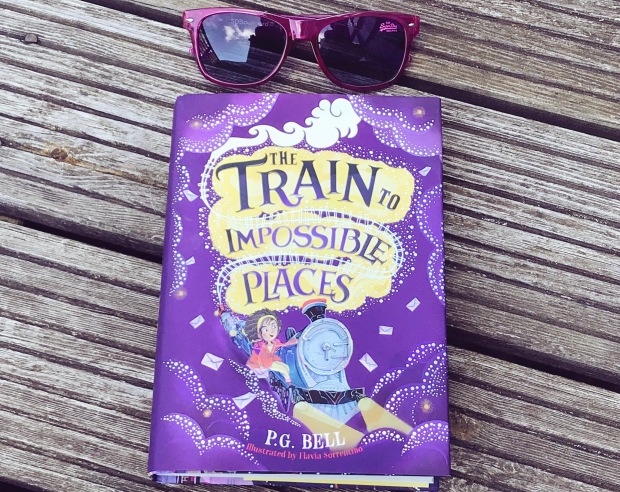 When Suzy is woken up by strange banging, clanking noises in the middle of the night, the last thing she expects to find in her living room is a troll wielding a wand building a magical shortcut for an inter-dimensional train!

Baffled by a contraption which defies the laws of physics as she knows them, Suzy hops on board as the train departs and whizzes off through weird and wonderful realms hosting creatures she had never imagined actually existed.  She soon learns that she’s aboard the train to impossible places – a service committed to delivering letters and parcels to the furthest corners of the universe. Suzy finds herself enlisted as deputy postal officer under hard-working postmaster, Wilmot, and sent off to make her first delivery to the much-feared Lady Crepuscula at The Obsidian Tower.

However, the delivery doesn’t go quite as planned when Suzy discovers that the snow globe she’s just delivered contains the trapped soul of a boy called Frederick. In a moment of madness, Suzy steals the parcel back, marking the start of a race against time to discover the truth about some strange goings-on in the Impossible Places – the fate of which may just be in her hands…..

An absolutely rollicking adventure through space, time and physics as we don’t know it. P.G.Bell has created a universe which challenges our understanding of physics (or fuzzics) and opens our eyes to the possibility that wormholes through space may just exist.

Lady Crepuscula in the role of ‘baddy’ with her army of statues is suitably menacing as her shadow swoops through the realm hunting down Suzy and the stolen snow globe. Whilst law-abiding and hard-working Wilmot provides a character it’s easy to love.  Throw in Ursel the bear, who’s in charge of the engine room and a truckload of exploding bananas and you’ve got yourself a corker of a book.

I also just want to highlight the brilliant work of illustrator Flavia Sorrentino who provided not only the cover and internal illustrations, but also a truly stunning hidden cover beneath the dust jacket. 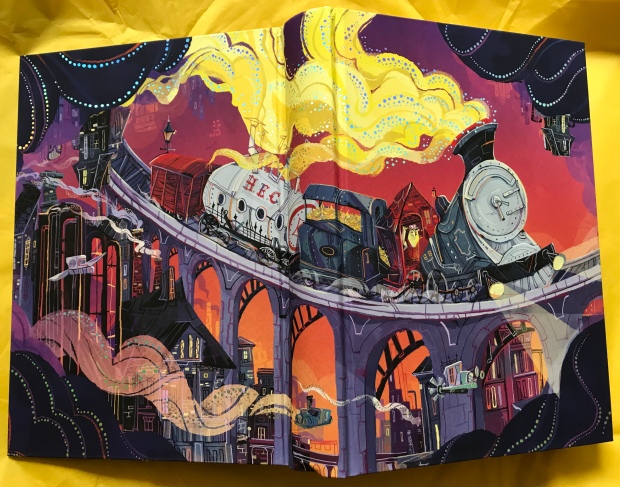 And now lots find out the journey this book’s been on to get from bedtime story to published title:

From Bedtime to Book: how and oral story became a published novel

I’ve always enjoyed reading bedtime stories with my son. It’s been a pleasure to watch him progress from his first picture books, through early chapter books, and then seeing his delight upon discovering Roald Dahl. We had just finished Charlie and the Chocolate Factory, and I was casting around for a new book I thought he’d enjoy when he surprised me with a request: “I want you to tell me a story that no one’s ever heard before!”

Looking back on it now, it was more of a demand than a request. He also wanted me to break the story into chapters, and tell him one per night for five nights. He’s nothing if not organised.

And so I made up the story of Suzy, the train and its crew of trolls more or less on the spot, over the course of those five nights. Most of that initial story is still in the novel, but how did it get from there to here?

The story stuck around in my head for almost a year after I’d told it. I didn’t have any plans to turn it into a book, but I kept revisiting bits of it in my imagination, smoothing out the rough edges, switching characters around and adding jokes. As time wore on, I realised that I might have something worth writing down – not with an aim to publication, mind you, but more for my own satisfaction. Maybe I could read it to my son again, I thought.

And so I sat down to write, with no real expectations whatsoever. This was just going to be for the fun of it.

It was so much fun, in fact, that I finished the first draft in exactly 100 days – the quickest I’ve ever written anything. And, as with all my first drafts, I sent it to my friend Claire Fayers to get some feedback.

Claire is the author of some fantastic children’s novels, including The Accidental Pirates and Mirror Magic, and we’ve always read each other’s first drafts, so if anyone could tell me how to improve The Troll Post Express (as the story was called at the time) it was her. I expected her to get back to me after a week or two with some tactful notes. I did not expect her to contact me just 48 hours later asking if she could show the manuscript to her agent.

As questions go, it was a bit of a no-brainer.

I still didn’t want to get my hopes up though, as I knew how hard it could be to secure the services of a good agent. And Claire’s agent, Gemma Cooper, was one of the best. But she read the manuscript and liked it and, a little less than two weeks after finishing the first draft, I signed with her. And that’s when the real work began.

Because Gemma’s got a fantastic eye for what works and what doesn’t, and she gave me some razor sharp feedback on how to make my story stronger. After five months of edits, Gemma took the manuscript to publishers and generated enough interest for an auction.

It was a frantic few weeks. I spoke to editors on the phone, read their proposals for the book, and took a lot of invaluable advice from Gemma. Everyone I spoke to was fantastic, but two publishers stood out immediately: Usborne in the UK, and Feiwel & Friends in the US. They understand the book in a little more depth, and put together the most detailed proposals for how they would put it out into the world.

The results speak for themselves, and I couldn’t be happier with them. The Train To Impossible Places is heading out into the world, ready to become a bedtime story for countless other children. I hope they enjoy it.

What an amazing journey – almost as fantastical as The Train to Impossible Places’! 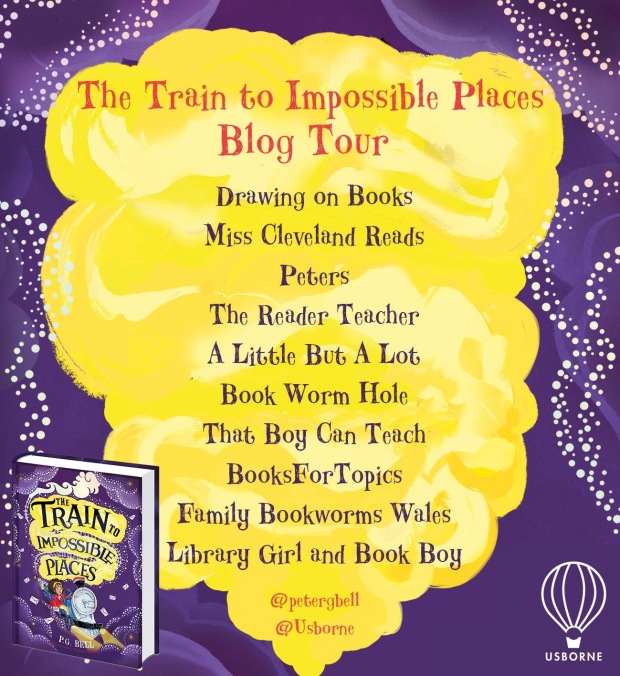 2 thoughts on “Holiday Read #3: ‘The Train To Impossible Places,’ with exclusive post by P.G. Bell, illustrations by Flavia Sorrentino”