This is the second of my much-anticipated holiday reads. I bought it a little while ago following a lot of good reviews, and now that I’m on holiday, I actually have time to read it! 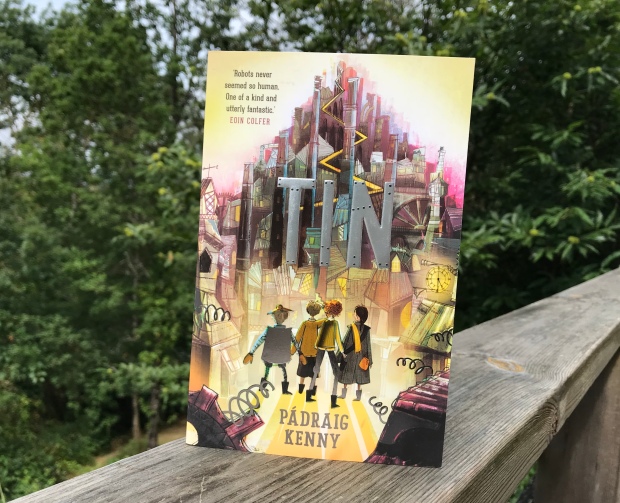 Orphaned Christopher works with Mr Absalom, an unregistered mechanic who specialises in making mechanical children (the creation of adults is illegal).  Mechanical children who are extremely lifelike due to a process called ‘basic propulsion’ which uses powerful combinations of magic glyphs to animate them.

Christopher is very happy with his life with his band of mechanical friends, until one snowy day, a terrible accident reveals a hidden truth which blows his world apart. Christopher’s friends must embark on an epic adventure to discover the truth about who they really are, the meaning of friendship, and what it means to be human.

The gorgeous cover (by Katie Hickey) has very strong echoes of The Wizard of Oz, which gave me an idea as to what some of the main themes of the story were going to be.  There is indeed a great and powerful Oz figure in Philip Cormier, master mechanic and tortured genius. He has the power to create incredible mechanicals but is hiding a secret.  ‘Skin Maker’ and aspiring mechanic Estelle would be the Dorothy figure, guiding a band of non-human friends on a quest to find out just how ‘proper’ they really are.

‘Tin’ also raises a lot of debates about the ethics of producing more and more powerful artificially intelligent robots – are we right to want to create robotic companions? Will they eventually be able to think for themselves and be out of human control? This idea has long been the subject of Hollywood movies. The book highlights some of the pros and cons in a child-appropriate way and shows what could happen if the technology fell into the wrong hands.

Another gripping read with just the right blend of mystery, action and peril, with characters you can’t help rooting for.

One thought on “Holiday Read #2: ‘Tin,’ by Pádraig Kenny, illustrations by Katie Hickey.”