Lots of children love to be scared. If you happen to know one of them, they might just love one of these chilling chapter books suitable for readers aged 5+

‘Isadora Moon Puts on a Show,’ by Harriet Muncaster (OUP)

One of my favourite, glittery half-fairy, half-vampires is back in her tenth adventure. Isadora is trying to prepare for the talent show at the Vampire Ball. The only problem is that she can’t fly as fast as the other vampire children or do magic as well as all the fairy children. What if they all laugh at her?

Isadora is going to have to muster up all of her courage to show the others just what she can do. Featuring shiny silver-edged pages, top tips on how to feel confident, and lots of activity ideas to help readers put on their own shows, this would be magical for readers aged 5+

Vlad is a member of the feared Impaler family. The bravest vampire family who ever lived. Except for Vlad who isn’t not very brave at all.

Or isn’t he? Unbeknownst to his parents, Vlad is secretly attending a human school.  He really wants to be in the school play but his parents are threatening to lock him up in The Black Tower if he doesn’t start practising to become a better vampire. What is he going to do? 7+

Barry Hutchison is surely the master of writing children’s books which have just the right balance of laughs and scares. And the third ‘Ted’ adventure is no exception.

After having taken over the world, again, Grizz has discovered a way to infiltrate the world’s wireless networks and is plotting to bring all the teddies to life. It’s going to be down to Lisa Marie and Vernon to save the day, again, and battle a giant-sized teddy bear with its mind firmly on mischief. 7+ 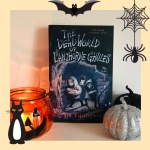 To say that 11-year-Old Edwin Robbins was less than impressed by the arrival of his new baby sister would be an understatement. When out house hunting with his father, Edwin discovers a rather peculiar old newspaper filled with what must be spoof stories about fizzing warts and green scabs. There was also an advert for a pen pal, which Edwin couldn’t help but respond. Not expecting a response, he later the letter up the chimney and thought no more of it.

Edwin gets a lot more than he bargained for when his baby sister’s kidnapped by his penpal’s aunt and taken to the Dead World.  He has no choice but to stand up and be the hero. 9+ 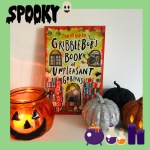 The last thing Anna and Nils expected to see on their way home from the park was a strange man who appeared to be walking an invisible dog. They also weren’t expecting him to drop a strangely named notebook which appeared to be magicked shut. Little do they know that he’s actually a goblin named Gribblebob. The pair soon find themselves in the middle of an adventure to save some magical books from a very evil with.

Lots of laughs, magic and an invisible dog! 9+

‘The Ghost in the Mirror,’ by John Bellairs, completed by Brad Strickland, Illustrated by Nathan Collins (Piccadilly Press)

This is spooky title is the next in the ‘The House with a Clock in Its Walls’ series and would be a great read for anyone aged 9+.

Mrs Zimmermann hasn’t managed to rediscover her magical powers after her last encounter with dark magic, but when she starts seeing strange pictures appearing on the wall of her front parlour, she starts to wonder if they might be being caused by the residue of her own magic.

When she sees her old magic teacher through an old mirror, Mrs Zimmerman decides that she and Rose Rita are going to take a little trip to Pennsylvania to change a wrong-doing in the past and solve the mystery. 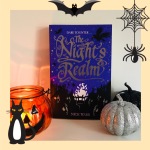 Billy Jones has been scared of the dark for as long as he can remember and recently it’s become a lot worse – he’s started to see strange creatures hiding in the shadows.

When his street is suddenly plunged into darkness, Billy is transported to the Night’s Realm, which is ruled over by an evil wizard who feeds on the fear of the children he’s enslaved. Definitely not one for the faint-hearted! Plenty of illustrations help bring the creepy cast of characters to life in this tale of bravery and facing your fears. 9+

Greetings ringdingers and snuggabouts! Welcome to the first title in a brand new series from the creators of the brilliant ‘Stitch Head.’ The rather fabulous Skeleton Keys is your narrator. An ex-imaginary friend turned ‘unimaginary’ with fingers which can open doors to hidden worlds and secret places!

Ben can’t quite believe it when his imaginary friend, Gorblimey, becomes an unimaginary too. But whilst Ben is convinced Gorblimey is kind and loyal, Skeleton Keys is not convinced. He senses mischief. But when it turns out there’s more than one imaginary in town, Gorblimey turns out to be the very least of his worries.

Full of tremendous imagination and wit (plus stunning illustrations!) 9+