I’d like to introduce to a new series of historical information books from Nosy Crow, in association with The British Museum. The ‘So You Think You’ve Got it Bad?’ series is packed with all things hilarious and fascinating about several ancient civilisations.

This series has a very distinctive, informal narrative tone which I think it’s target readers will really enjoy. Although perhaps not entirely in keeping with the time periods being written about, Book Boy loved the chatty banter-style text.

Each book is highly illustrated which further adds to the series’ appeal and compliments the tone of the text. 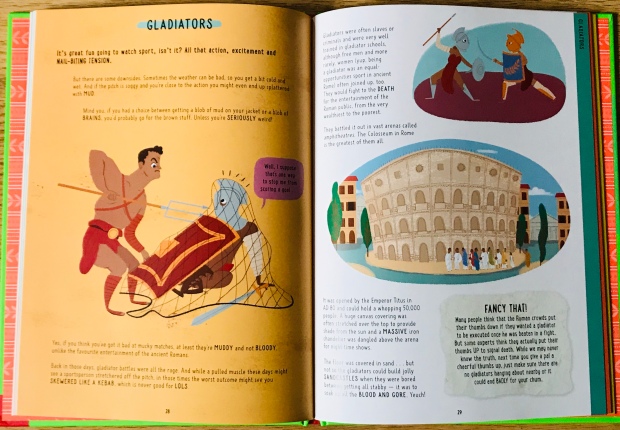 If you take a visit to Ancient Egypt, be
prepared for venomous cobras and deathstalker scorpions.  You might want to pass on a cow pat-based remedy from the local doctor. And you’ll definitely want to avoid the trained monkeys who work for the local law enforcement agency!

more to your taste? Possibly, if you fancy the idea of washing your clothes in wee or using goat poo to rid of those irritating head lice? That’s before you even get as far as battling lions in the gladiator arena or trying to avoid the wrath of the many gods worshipped at that time!

Maybe Ancient Greece might be a safer bet? It might be – if you don’t mind eating blood soup or living with the Spartans on a mountain wearing nothing but a cloak! If you’re very lucky, the local doctor might treat your ailments with leaches. If not, then it’s onto Charon’s boat and off down the River Styx into the Underworld with you!

An engaging, highly-illustrated series with an original voice. Ideal for readers aged 8+

One thought on “The ‘So You Think You’ve Got it Bad?’ series by Chae Strathie, illustrated by Marisa Morea.”