Welcome to the blog tour for “TrooFriend” by Kirsty Applebaum – make sure you read her thoughts on whether she’d like to own a TrooFriend herself.

Having read and loved her debut, “The Middler,” I was very impatient to read her next title and I had high expectations. I was not disappointed.

I do not bully. I do not harm.

Sarah’s parents are worried that with her best friend staying with her mum every weekend, Sarah will be lonely. Although she’d prefer a puppy to an android, Sarah’s parents have bought her a Jenson & Jenson TrooFriend 560 Mark IV to keep her company.

At first, Sarah is slightly unnerved by Ivy’s (as they’ve named her) ability to accurately read people’s emotions and seeming inability to lie. However she quickly realises that having someone to tidy your bedroom and put your parents off the scent when you’re up to something can be incredibly useful.

What. A. Read! From the opening few pages I was quietly unnerved by some of the events which followed and had a growing sense of unease which only grew larger as the book went on. Kirsty is a master of manipulating your emotions. Planting seeds of ideas which develop with each turn of the page.

Obviously, Kirsty’s story raises a lot of interesting points about the use of artificial intelligence to create human androids. How can we be sure they are safe? Is it ethical to develop near-human androids then treat them as just objects? What if they begin evolving spontaneously and are no longer able to be controlled? Will we unknowingly have created a super-race capable of overthrowing humans? Unsurprisingly, Kirsty had a few thoughts about these points and whether or not she’d like to own a TrooFriend herself.

TrooFriend tells the story of a girl called Sarah whose busy parents buy her an artificially intelligent robot friend to keep her company. But not just any artificially intelligent robot friend. They buy her the latest Jenson & Jenson TrooFriend 560 Mark IV – the best choice for your child. At first, Sarah is not sure about this strangely human-like android – what she really wanted was a dog. But after a while, she starts to see its advantages. However, rumours about the TrooFriend robots begin to circulate. Are they rather more sinister than Sarah’s parents anticipated?

When the question ‘Would you like to own a TrooFriend?’ was put to me I decided to search the internet for real-life human-like robots. Some of the results were quite remarkable. A recent news report showed a group of scientists from Osaka University who have developed a robotic child’s head that gives realistic emotional responses, including feeling pain. And a robot called Sophia, designed by Hanson Robotics, works as an Innovation Ambassador for the United Nations Development Programme. She can hold a conversation and was even interviewed by Holly Willoughby and Philip Schofield on This Morning.

I’m not sure I really would like to own a robot like this. Holly and Phil certainly didn’t look too comfortable sitting next to Sophia on the This Morning sofa. Safety and privacy issues abound, and there is also the ‘uncanny valley’ – that feeling we get of being ‘creeped out’ when confronted by a robot or doll that is very almost human, but not quite.

However, there’s one exception I might make. Like Sarah, I also wanted a dog when I was young, but it was impossible as both my parents worked. Now I’m older, I’d still love one but I’m really not keen on cleaning up poo or footing holiday dog-sitting bills. Plus my husband claims he’s allergic to most hairy domestic pets.

So why not a robot dog instead? K9 was always my favourite Doctor Who character. No poo. No hair. Just switch it off when you go on holiday. And you can buy them right now. The latest Sony AIBO dog recognizes faces, responds to commands and remembers tricks.

No, I don’t think I really would like to own a Troofriend, but if safety and privacy issues can be overcome, I might well be in the market for a robot pooch.

Hmmm, interesting. I think I agree with Kirsty. I’m slightly wary of new technology like the ‘Alexa’ devices. So owning an android with even greater capabilities does not seem like a good idea to me.  Have a read of ‘TrooFriend’ and see if it helps you make up your mind too.

*Thank you to Nosy Crow for inviting me to be a part of this blog tour. Make sure you visit some of the other stops too* 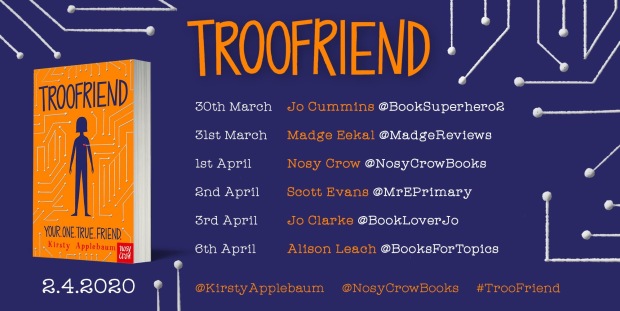