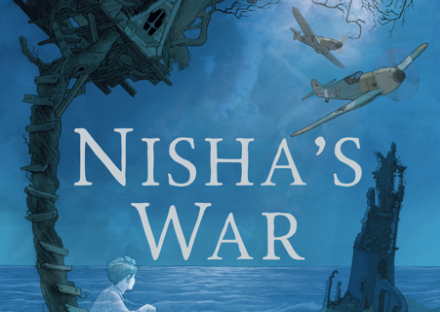 Oh my goodness, if you’re looking for a new title to fit with a WW2 topic, or for an atmospheric ghostly class read, then this is absolutely the book for you!

Make sure you scroll down to read Dan’s Q&A about the inspiration and process behind writing Nisha’s War.

Malaya, 1942. Nisha’s home is destroyed by war and she and her mother, Amma, flee to her father’s ancestral house in England, perched on a cliff top on the cold Northern coast.

When Amma falls gravely ill, Nisha is left to face her formidable grandmother alone. Grandmother’s rules are countless, and her Anglo-Indian granddaughter is even forbidden from climbing the old weeping tree.

But when a ghost child beckons Nisha to sit under its boughs, and promises her Amma’s life in return for three truths, its pull proves irresistible …

• What inspired you to write Nisha’s War?

Nisha’s War was the collision of three ideas. A few years ago, I visited my brother, who lives in Singapore. While there, we went to a museum dedicated to the defence and fall of Singapore during World War 2, and I knew, straight away, that I wanted to write about it. But I didn’t know what story to tell. I also had a few ideas simmering for a story about a child who is given three tasks by a mysterious figure, but I couldn’t find the right way to tell it. The Barrow Island setting came from a story I had started about a group of children sent to live on a windswept island in the North Sea. Then came the ‘lightbulb’ moment, and I put the three ideas together. Of course, it’s never as simple as that, though, and I had to go away and research the war in the Far East so I could make Nisha’s story feel as realistic as possible.

• What research did you do?

I had already visited Fort Siloso in Singapore, and taken a LOT of photographs of the artefacts and displays. I also did a lot of reading around the history of the invasion of Malaya and the fall of Singapore – the largest ever surrender of British-led forces. I’ve written before about life in Britain during the war, but that knowledge all needed to be refreshed, so I revisited some old research as well as investigating other sources. For the reflection of life on a rubber plantation, I looked at a lot family photos and used my own memories. I grew up on a rubber plantation in Sumatra, a short hop away from what is now known as Malaysia, so Nisha’s house in Malaya is the house I lived in. The colourful memories she has are, for the most part, my own. I wasn’t alive in 1941 (I’m not THAT old) so I wasn’t part of the evacuation, but I found lots of photographs and some excellent first-hand accounts of people who had fled in convoys through Malaya to reach Singapore in the hope that they would be safe.

• How important was the location in the story?

Location is hugely important to the story; it’s a metaphor for Nisha’s mental well-being. Most of her memories of her home in Malaya are happy, warm, and full of love. She remembers Malaya in bright colours, which reflects her state of mind. In her journal, she writes about the evacuation from the plantation where she lives, and during that journey things change for her. When she reaches England, all the colour has gone from her world. Nisha has lost all hope and the setting reflects that. Barrow island is cold, grey, and harsh. The weather is dull. The nearby village is bland and confusing. The story is about Nisha learning to see the colours once more.

• What are the main themes/ideas that you hope readers take away from reading Nisha’s War?

When I started writing the story, I didn’t have any particular themes in mind. But when I think about it now, there are so many! Loss, grief, displacement from home, friendship, love, empathy, understanding, hope, courage, race, kindness, acceptance … I could go on! For me, the stand-out themes are empathy, hope, and inclusivity, but hopefully readers will take from Nisha’s War whatever they need to take from it.

• And finally, adventure seems to be at the heart of all your books, what’s the most adventurous thing you have done or would like to do??

The most adventurous thing I have done? Hmm, that’s a good question. I’ve climbed a live volcano, trekked in the Sumatran jungle, and shot the rapids on an inner-tube from a logging truck. When I was a teenager, my brother and I used to spend days at a time, adventuring along the Araguaia River in Brazil. We’d pack a small canoe with fishing gear, take a waterproof to sleep under, then paddle upriver to catch piranhas and catfish, and to see the river dolphins. We’d go where there were no people, no phones, no electricity … nothing … and we’d find somewhere on the riverbank to sleep at night. We didn’t think of it as adventuring, it was just a way to spend a few days having some fun. Now though ..? It was most definitely an adventure, and I would love to go upriver with my brother again!

NISHA’S WAR by Dan Smith is out now in paperback (£7.99, Chicken House)

Love, love, loved this! I got sucked straight in to the dual mysteries of Nisha’s new island home, and the mystery of what happened to Nisha’s and her amma before they were forced to flee their idyllic life in Malaya. The glorious landscape is described in such vivid detail that you can tell Dan is writing from his own experiences.

This story explored an aspect of the Second World War which I knew very little about. Most books of this genre tend to focus on the European fronts and evacuees. The exploration of the panicked evacuation of Malaya and the fall on Singapore. I think children will be fascinated to learn about the wider global impacts of the war and about the hostility faced by refugees when they first arrived in England.

The inclusion of mysterious ghost who sets Nisha a life-or-death challenge is really just the cherry on top of an already delicious cake!

An atmospheric ghostly mystery with a twist. This would be an excellent choice for any reader aged 9+