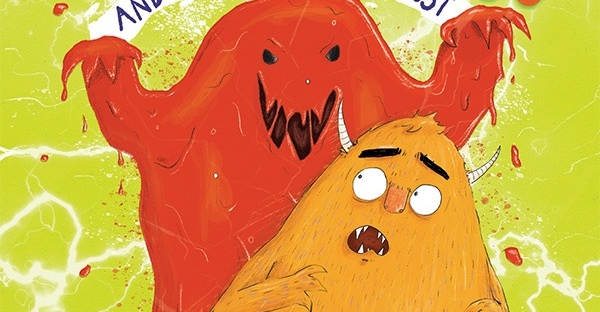 Monster Max is back in another community-minded adventure. If you missed the first instalment in this chucklesome series, you can take a look here. Make sure you read Robin’s thoughts on why ‘funny’ is so important.

Max is an ordinary boy, except that he can turn into a monster when he burps…

Max and Peregrine are volunteering at an old people’s home, when strange things start to happen: one resident is walking on the ceiling; one is riding their wheelchair through walls; and Reggie says his marmalade is haunted (although no one listens). Can Max and his friends work out what’s happening to protect his family and the local community? Things aren’t looking good – the Marmalade Ghost is turning into a sticky Godzilla, Max falls out with his (joint) best friend, and then, just when it can’t get any worse, someone kidnaps Max’s cat, Frankenstein… Time to ‘Protect and Do Good Stuff!’

Why Funny is Important

Historically, I’ve done most of my book shopping in airports as it’s where I’ve tended to spend a lot of quality time over the last couple of decades. I quite like them – I really do. Contrary to popular belief, airports aren’t all the same, once you’ve trained yourself to look around the serried ranks of watch counters and banner ads for perfume.

And, on the basis that it might well be the last thing I read, I tend to go for books with humour.

This is a roundabout way of getting the obvious point over with: funny books lighten the load – whether it’s because you’re away from friends and family and feeling a bit glum or because the wing has just fallen off.

But that’s just the start. One of the reasons I like funny books and why I also write them is what you can learn from them. Humour can reach the parts other genres can’t reach – it’s a bit like fantasy in that respect. This is down to the fact that it allows you to approach a subject from an original angle. Humour is not just described as light because that happens to be the opposite of heavy – i.e. hard to digest or depressing but because it illuminates.

On the face of it, it doesn’t work unless it makes you smile or laugh – much in the same way that an airport doesn’t do its job if you don’t get safely and with the minimum fuss from A to B, stocked up with booze or face cream. But, like airports, I love the infinite variety of comedy hiding behind the common purpose: each nation has its own brand, but that can be exported and that’s where our common ground is often to be uncovered. Our humanity. Humour ages, develops and passes through phases. It can surprise you by its originality. It is very often where innovation lies in literature.

But, as a children’s writer, the thing I cherish most about comedy is that it shields. And none more so than those who are often our least regarded and, sadly, most-harmed humanity. But to laugh at our hurts, to stand up to evil by mocking it is to empower. Humour is a protest for the disenfranchised – and that’s children.

I love the power that funny books give to their readers to explore tricky topics in a safe way, and, of course, their power to produce great big belly laughs. Thank you Robin for writing that piece for us.

*Many thanks to Firefly Press for organising this special piece from Robin for me to host.