Luke and the other members of S.C.A.R.F are back in another battle against intergalactic forces of evil in the fourth installment in this prize-winning series – evil’s never been so squishy…

Following an unfortunate inter-dimensional incident in their previous battle to save Bromley/ the Earth, Luke’s mind has swapped bodies with that of his older teenaged brother, Zack (aka Star Lad). Sadly, he has no control over his brother’s superpowers – which is totally unfair as Luke is definitely the one who deserves to be a superhero the most! He has all the gear, whereas Zack has no superhero-branded clothing at all!

The youth of Bromley (and their families) have all been invited to Great Minds Leisure Park for a complimentary all-inclusive stay to recover from the recent near-obliteration of their town and schools by an angry inter-dimensional being.  However, Luke and the gang soon start to suspect that all is not as it seems.  Alongside some very imaginatively named brain-themed zones and restaurants (Spinal Cord Splash Pad, anyone?), there are also some highly autonomous (and stroppy) transportation pods and staff members who don’t appear to be acting entirely of their own accord….

Fans of the series will not be disappointed as the mirth-inducing superhero madness continues apace.  A cracking book full of the laughs, in-jokes and self-disparaging  nudges I’ve come to expect from David Solomons.

I am absolutely delighted to be able to offer you some totally exclusive superhero content for budding cartoonists, readers and writers alike:

How to Write a Supervillain

In my new novel, My Arch-Enemy is a Brain in a Jar, I spent a long time thinking about the villain of the piece. When creating any character the first question you have to ask yourself is: what does he or she want? The answer to that will drive every scene they’re in. In the special case of a supervillain, you want to know about their ambitions. Think of it as an evil interview.

First question – is he/she trying to take over:

a) The conversation?
b) The PTA?
c) The world? This is the biggie, and not as easy as it looks. No one in fiction has been more successful at putting down invasions and villainous takeover attempts than Earthlings. So, well done us. As a supervillain with this aim you need to be well-resourced, ideally with a Weapon of Infinite Power, and a Plan B when your WoIP is neutralized by the Good Guys in chapter twenty-three.

Where is your supervillain based?

a) A perpetually circling, invisible skyship. These are expensive. The cost of developing an anti-gravity device alone would empty the bank balance of most supervillains, let alone the extra expenditure required in making the whole thing invisible. Anticipate a cost overrun. Ring-fence money for your minions – a well-paid minion is a trustworthy minion.
b) A volcano. Dormant does NOT mean extinct. Before moving in to your new lair, always get a certified volcanologist to give you a survey report. There is nothing worse than spending years painstakingly plotting the downfall of the human race, only to come in the next morning and find the whole thing’s been incinerated in an unexpected eruption.
c) Rose Cottage, Beech Avenue, Little Chipping. You don’t get a lot of supervillains with an HQ in the countryside. If you do go in this direction, you want to make sure there are good transport links for your Army of Doom to march on the major cities. Inward investment is a hot button. Some rural councils will offer you a grant to move your business to the sticks. But when they ask you for a mission statement, it’s probably not a good idea to mention your goal to conquer the human race and bend them to your will.

What do I wear when taking over the world?

a) The classic mask and cape will never go out of fashion. Capes are ankle-length this season, but only attempt this trend if you’ve had a good deal of cape-wearing experience. Nothing more embarrassing than tripping over during your evil monologue.
b) Powered armour. Don’t skimp on this one. Never buy your heavily armed robotic exoskeleton off-the-shelf, always ensure it is properly tailored to your proportions. An ill-fitting powered suit not only restricts your ability to move, it sends a message to your foes that your black heart isn’t really in it. Remember to charge the battery before you enter battle.
c) Swimming costume. Only for aquatic-based villainy. Always double-check that the mind control device on your sharks is tuned to your brainwaves. Remember to bring a towel.

Finally, let’s take a moment to celebrate the supervillain. A superhero is nothing without a suitably awesome foe. The more powerful, smart and sneaky the opposition, the higher the stakes, the more satisfying the story. Get the bad guy right and you’re more than halfway to a great story.

So there you have it: where there’s good, there also has to be some suitably awesome evil!

Now, I have something awesome for you – a fabulous giveaway!  Just comment below with your secret superhero alias to be in with the chance of winning a pizza box stuffed full of #BrainInAJar goodies (entry closes on Sunday 30th, 9pm, UK only). 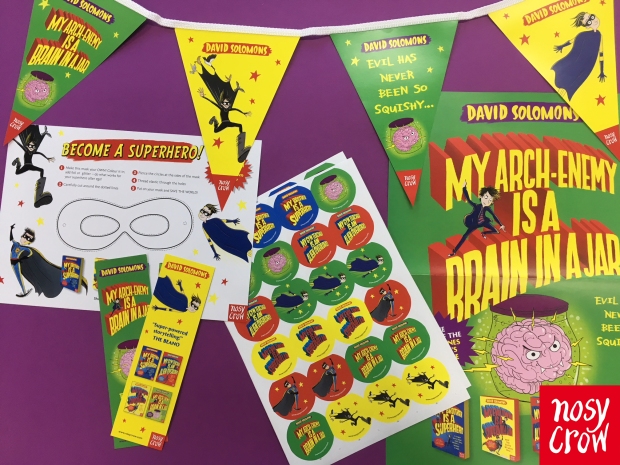 To read my reviews of the other great titles in this series, click HERE or HERE  or even HERE !

One thought on “‘My Arch-Enemy is a Brain in a Jar,’ by David Solomons, illustrated by Robin Boyden – guest post and giveaway!”