Today marks the start of children’s mental health week. It’s a sad fact that children’s mental health services are receiving many more referrals than they can process so vulnerable children are having to wait months and even years before they are able to talk to a specialist. It’s for this reason that books like ‘Felix’ are invaluable tools in opening up discussions with children and for providing safe spaces for them to explore their emotions.

Felix was an unhappy boy, he dragged an enormous suitcase behind him but didn’t know what was inside. When his grandmother passed away, a darkeness appeared. His suitcase became heavier and heavier until he could barely push it along.

Will Felix ever be able to let go of the negative emotions he’s been carrying around with him? Will he ever feel free? 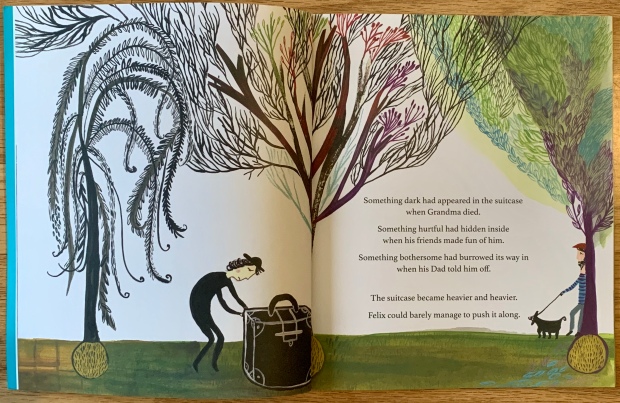 Like all Tiny Owl books, this title is beautifully produced, with stunning artwork whose colours mirror Felix’s state of mind. You can literally see the weight of his emotions pressing down upon him until the little boy helps release them at the end.

This book would be a fantastic tool to address the concept of the ‘emotional baggage’ which people can carry with them without even realising it until the right person comes along to help them. It shows very clearly the contrast in Felix’s mood and state of mind before and after his ‘suitcase’ is unlocked.

A sensitive & uplifting exploration of some of the very negative emotions children can burden themselves with and how sharing them can have a hugely positive impact. 5+